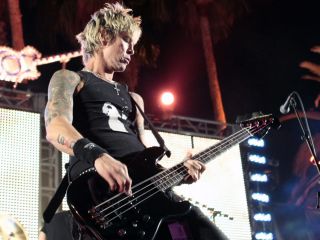 Duff McKagan loves the Vultures as much as we do (Image credit: Thomas Myers /Retna Ltd./Corbis)

Sure, the three Vultures have stellar pedigrees (Grohl in Nirvana and Foo Fighters, Homme in Kyuss and Queens Of The Stone Age, and Jones, well, he was in this baby band called Led Zeppelin).

But weeks before we got our first real listen to Them Crooked Cultures, the term 'supergroup' was applied to the band (we admit it: we're guilty), and McKagan, who knows a thing or two about such labelling, has recently blogged on the trend.

"When I first heard that John Paul Jones, Dave Grohl and Josh Homme were forming a band last spring, I must say that I was jealous," McKagan writes. "Are you kidding me?! These three mega-talented and unique figures playing hard rock in a unified and focused group? I was excited, to say the least, from a player's perspective AND as a fan. Then came the inevitable 'supergroup' tags."

This is no 'cash-in'

"'Supergroup' conjures a negative image in my mind, and we in Velvet Revolver had to deal with this label in our first year. Fans never called us a supergroup, mind you, only journalists. I've heard this title being bandied about in reference to Them Crooked Vultures, and I think it is a cheap way out.

"To label an act a supergroup somehow suggests - to me, anyway - that they were formed to cash in on the members' superstar power...And NOBODY is cashing in these days. Acts are not selling enough records to turn much profit - if any - and touring is a shrinking business. TCV is in this thing for the right reason, and that is to fucking rock."

"For these three guys to come together and form a real band - well, hell, it must be like some sort of fairy-dust shit just being at a band practice! Can you imagine? Them Crooked Vultures have created something new and fresh with no obvious nods to any of their past bands. A hard feat, for sure.

"Yes, you can tell it's JPJ on bass, Josh singing and playing guitar and Grohl killing the drums. But the overall originality of the band's sound is startlingly refreshing. I sound like a damn rock critic right now, a breed of writer I absolutely detest. These guys are just straight-up cool and pretty fucking righteous, if you ask me."