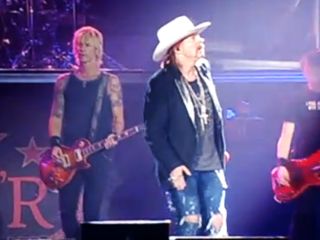 Duff McKagan briefly rejoined Gun N' Roses last Thursday night (14 October) at London's O2 Arena. The occasion marked the first time the former GN'R bassist, who most recently was a member of Jane's Addiction, and Axl Rose have performed together since 1993.

Halfway into the set, McKagan walked on stage and played bass on the song You Could Be Mine. During the remainder of the set, he made three more appearances, playing rhythm guitar on Nice Boys and Knockin' On Heaven's Door, while during the encore number, Patience, he added some tambourine.

From all accounts, McKagan's reunion with Axl Rose wasn't planned in advance - the bassist just so happened to be staying at the same hotel as the band. Rose introduced his former GN'R bandmate to the audience by saying, "There was this guy at the end of my hallway playing all this loud music and shit. And I was all like, 'What the fuck? Oh - it's Duff!'"

Up till now, guitarist Izzy Stradlin has been the only original Guns N' Roses member to perform alongside Rose (it happened in 2006). However, ongoing personal tensions between the mercurial singer and guitarist Slash make a full-scale reunion seem unlikely. One of Rose's more recent comments about the band's ex-lead axeman is, "One of the two of us will die before a reunion. However sad, ugly or unfortunate anyone views it, it is how it is."