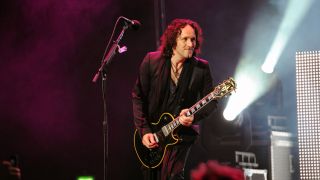 Def Leppard guitarist Vivian Campbell has revealed that he is in recovery from cancer.

Announcing the news ahead of Def Leppard's summer tour, he released a statement to the press which reads:

"I feel fortunate that my cancer sent me an alarm call in the form of 'the cough that wouldn't quit'. Otherwise, how would I have known? After several months of trying every inhaler known to man, my doctor finally had me X-rayed. A further CAT scan revealed that enlarged lymph nodes were doing wrestling manoeuvres on my windpipe - hence the cough.

"What was causing the enlarged lymph nodes, however, was yet to be determined, so I underwent a surgical biopsy on March 11th, the first day of Leppard rehearsals for our Viva Las Vegas shows. Obviously, I didn't make it to rehearsal that day, but it's okay; I know the songs by now...

"My diagnosis was Hodgkin's Lymphoma and 6 months of chemotherapy is the prescribed treatment. I'm about 2 months in and feeling rather spiffy, all things considered. Hodgkin's has an over 80% cure rate, so by my reckoning, if you're going to have a cancer, Hodgie's is the one to have!

"The reason I'm sharing this with you is because, despite cancer and chemo, me and my new aerodynamic hairstyle (read: no hair) are going on tour this summer with the band and I don't want anyone to be so shocked by my new look that they ask for a refund. Simple economics, really.

"My family, friends and bandmates have all been extremely supportive through this and I look forward to a summer full of shows with both Def Leppard in June/July and the debut of Last In Line this August."

Def Leppard will be performing at a number of festivals across Europe and North America in June and July.