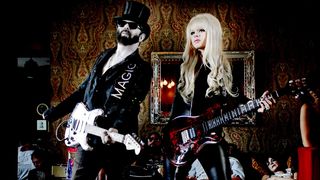 Dave Stewart and Orianthi are looking for a few good musicians

Dave Stewart isn't exactly sure when the aha! moment struck, but he's thinks that it happened at some point while channel-surfing between vocal competition shows. "I was watching all these things before I left Britain - the Pop Idols, X Factor and all that stuff," he says. "And I started to think, 'Hey, what about all the great kids out there who play guitar or drums? Why can't we have something where the players can do their thing?'"

Stewart put his idea into motion, partnering his multi-faceted company Weapons Of Mass Entertainment with TalentHouse to launch BeMyBand, a quarterly competition in which musicians from around the world can audition for a chance to perform with high-profile artists.

The inaugural artist for BeMyBand is Alice Cooper guitarist and solo star Orianthi, who has worked with Stewart on a variety of projects including her most recent album, Heaven In This Hell. Drummers, bassists, keyboard players and guitarists can submit performance videos to BeMyBand no later than January 25, 2014 (by 10am PST) for consideration. Up to 10 finalists for each instrument will be asked to play original tracks from Orianthi herself, and of those finalists, four will then be chosen to perform live with Orianthi as her band in Los Angeles this coming Valentine's Day. (Click here for more complete information, rules and to enter.)

Stewart and Orianthi sat down with MusicRadar the other day to talk about BeMyBand.

It's interesting, Dave, you wanting to put a spin on the talent competition shows by getting players involved.

Dave Stewart: "Yeah, well, those other shows are great for the singers, but I don't know how inspired a keyboardist or bass player would get from them, you know? So with BeMyBand, artists, starting with Orianthi, can use it as a way of finding people to perform with. There's a lot of unknown players who are looking to be discovered. They'd love to be on stage with somebody like Orianthi, so for them this is a dream come true. And you know, there's nothing more inspiring than being put through the ropes - rehearsing with the proper person MDing - and suddenly, the artist comes in and you're on stage with them, playing a whole show. It's great."

Orianthi: "For me, this is going to be so much fun. When Dave told me about it, I said, 'Definitely. Count me in.' Anything to get kids inspired, you know? Just watching their videos and seeing how excited they are - whether they're doing original songs, covers, whatever - it's so amazing. I'm really excited about this. It's gonna be such a fun night."

Stewart: "It's hard times for musicians out there, what with the advent of free downloading and all those things. That makes one side of being a musician extremely difficult to get going; on the other side of it, though, you have live performances, and that's still alive and kicking.

"See, I'm interested in helping in any way I can. There's that 1.1 percent of artists out there who manage to make it, but it's a very, very complicated process; you need luck and tenacity and magic and the whole thing. But even with all of the variables, there's still an amazing life you can have playing dates with a band or with an orchestra or whatever. Creativity as a living is still a pretty good option. Think about it: It's never sold at school; there's never anybody saying, 'Hey, why don't you go in for Creativity as your career?' [Laughs] You know what I mean?"

If you can put it into words, what are you looking for from any of these submissions? What's that one thing you're hoping to find?

Stewart: "The thing is, I have actually found musicians on YouTube; I've flown them in and worked with them. Having your videos out there is really important. YouTube is where I first saw this girl Nik West, a bass player. And Orianthi herself - Michael Jackson saw her on MySpace, right, Orianthi?"

Orianthi: "Yeah, it was kind of on MySpace, and then he saw me on YouTube - that's where my videos were. And also through Steve Vai and Santana. But sure, Michael saw my videos on YouTube. It's got such a huge following. Things take on a life all their own if you have something cool on there. If somebody likes your videos, they're gonna tell their friends. They're gonna send e-mails about you, and before you know it, your name is getting around."

Stewart: "I think I'm setting up something pretty cool. After Orianthi, there'll be another artist and another artist, and BeMyBand will become a regular thing. What it does is, it puts into context all of those kids who are playing drums along to tracks in their bedrooms. There's thousands of those kids out there - thousands and thousands.

"I'm really excited to see what happens. Ori might find an amazing band that's all Australian or an amazing band that's in Russia, or it could be an American band; it could even be a person from each country. For the artists who join BeMyBand, they might find the people they've always wanted to play with, and for the musicians who get discovered, think of what a morale booster this will be for them. To me, this is a win-win on both sides.

"Talenthouse is a great platform. They allow you to upload your portfolio and videos, and everybody else can go in and see them. It's got 2.5 million members, with all of these bands and brands. It's outside of everything in the normal system, yet it's a nice little eco-system in and of itself."

Orianthi, is there the possibility of musicians continuing with you, or will this just be a one-night-only gig?

Orianthi: "I've been borrowing Alice Cooper's for my own thing - I usually do shows during off days. We do it as a three piece. But yeah, with this, if they're great, there's definitely the chance of doing more shows with me - hell yeah. I'm looking for people who have fire and are very passionate about playing. If they come together and everybody's really cool, sure, we could do more. Vibe is really important to me. I want to find somebody who, if they're following me while I solo and then there's that moment when I point to them, they're gonna know what to do."

You two could potentially be wading through a heck of a lot of videos. How are you going to sort through them all?

Stewart: "We've already gotten a lot of videos, Ori and I. We're the only ones that can see them at the moment, but there's a point during this where they'll be available for the public to see, and there will be voting. I think we have something like 180 videos already. It'll probably go up to 1000 by the time we're done."

Ori, do you have the perfect band in your head?

Orianthi: "It's hard to say. You know, I'm influenced by so much - I love rock, country, blues, really anything - so I'm hoping to find musicians who aren't just into one thing. I want people who can appreciate it all and can play it all. So if you're a jazz keyboard player but you're really into rock, so much the better."

Stewart: "And a lot of times you can tell that about a person just from watching the videos. We were talking about a kid from Russia who's playing Little Wing, and then we switch to another video and it's somebody in South America. It's really good fun watching these. There was another clip of a girl just shredding on her sofa.

"The problem is that we have to make the contest 21 and over - the American laws and regulations; plus, the winners are being flown in and everything. Of the four people that are chosen, they're going to fly in and stay at a hotel for six nights. We'll rehearse at SIR Studios, and I'm going to MD them a bit. Then Orianthi will come in on the last days of rehearsal, and after that everybody will play live. It'll be an intense week. Another crazy adventure." [Laughs]