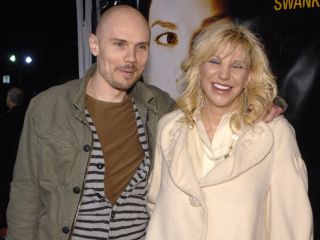 Billy & Courtney: a match made in...? (Image credit: Phil McCarten/Reuters/Corbis)

Smashing Pumpkins mainman Billy Corgan recently had some tough words for his one-time friend and ex-flame Courtney Love. For her part, however, Love appears to be in a fence-mending mood.

In an interview with Rolling Stone, when discussing whether he would take issue with Love releasing some songs they they collaborated on, Corgan said "it would be a real big problem, because I haven't given my permission.

"I have no interest in supporting her in any way, shape or form," he added. "You can't throw enough things down the abyss with a person like that."

"I love you, I love your strong and eternal heart, even love the fucked up gnarly amazing magnificent bigger-than-god louder-than-love karma of the songs you write and allow me to fly with. We have again created beauty from the agony between us, all the buried and unburied anguish, all that is true, that is gold, that is meant to be is within this endless and somehow eternal cycle of Billy & Courtney.

"I hope you will take my sincerest apologies for all the thousand ways I sometimes offend you, because I know you are a king, a prince, and my beautiful noble boy. No one will ever force my hand, nothing will come between the truth of what we are:

Well, one thing's for sure: it sure sounds like Courtney wrote it.