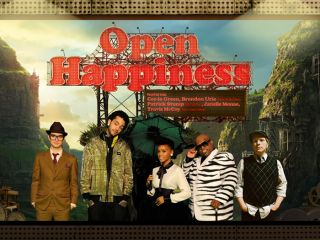 Open Happiness is Coca-Cola's latest musical endeaver - a "song to uplift and inspire" - and do whatever it was that Justin Timberlake's I'm Lovin' It did for McDonalds.

Unlike Jack White's stomping Coke Zero theme, Open Happiness is a joyful whistle-fest and what seems to be a mash-up of every aforementioned band in one. Although Cee-Lo's co-writing credit is very apparent and Stump's vocals dominate most, in our most humble of opinions.

Butch Walker takes the other writing credit while a Polow Da Dan remix is available to purchase from iTunes. A 'percentage' goes to charitable causes, so if you like whistling you can buy it with a clear conscience.

There's a stream of the song on MySpace, along with a gallery of behind-the-scenes/making-of type photos. So they can prove it actually happened, presumably.