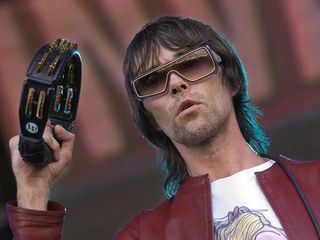 Well, that Stone Roses reunion thing turned out to be just a rumor. No matter. Ian Brown is on the verge of releasing his next solo album My Way in September, and he's streaming a new song called Just Like You.

On the site, you'll see a message, handwritten by Brown, that implores fans to "beg, borrow, steal or buy" the album.

My Way is "for everyone"

"Everybody, please be aware my best album yet is to be released on September 28. Titled My My, it contains something for everyone," the note says.

(You know, call us silly and old-fashioned, but we're quite sure the singer would prefer you actually purchase his CD as opposed to stealing it.)

Brown isn't lacking for confidence when it comes to My Way. During a recent interview, he said that he and producer David McKracken used Michael Jackson's Thriller as their blueprint. "Every time we wrote a song we didn't think was strong enough, we scrapped it," he told NME.