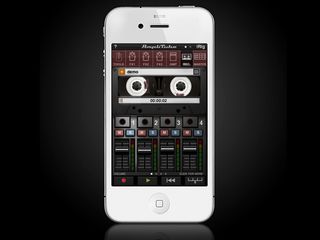 The multi-track interface is reassuringly old-school

IK Multimedia has announced a major update to AmpliTube for iPhone, adding considerable weight to its claim that the app is "the leading guitar software for iPhone." Available from the App Store now, AmpliTube 2.0 features the following upgrades:

Hear it in action

We thought we'd put AmpliTube 2.0 through its paces. The following demo was recorded in the MusicRadar office using only AmpliTube 2.0 on an iPhone 3GS, an electric guitar, the iRig interface and the iPhone's internal microphone. Check it out:

The new multi-track studio functionality makes an already good app great. The only shortcoming is that there's not an easy way to trim the beginning and the end of your final mix without using additional audio editing software, but as an easy-to-use, fully-featured studio in your pocket, AmpliTube 2.0 is very hard to fault.

AmpliTube 2 for iPhone is now available from the iTunes App Store in 3 versions:

Additional gear can be added through in-app purchase of a-la-carte models with stompboxes costing £1.79 each and amplifiers + cabinets for £2.99 each (available selection depends on the version). The new four-track recorder with master effects section can be added as an in-app purchase for £6.99 in each of the available versions.