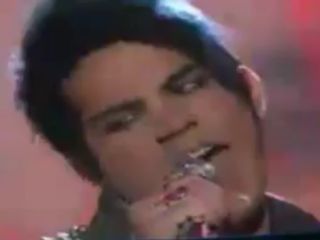 Velvet Revolver are still searching for a replacement singer for Scott Weiland. Perhaps they be watching American Idol. Slash, for one, was in the audience last night - did he see his band's future?

It was all part of what American Idol calls 'Rock Week,' in which the final four contestants - Allison Iraheta, Kris Allen, Danny Gokey and Adam Lambert - sing tunes than run the gamut from The Beatles' Come Together to Janis Joplin's Cry Baby.

Last night, all performed admirably but nobody seemed to truly hit it out of the ballpark until Lambert, who had been previously coached by Slash to avoid ad-libbing in the upper register, came on and lit into an I'm-going-for-it version of the Led Zeppelin classic Whole Lotta Love.

We'll let you judge Lambert's skills in the video below, but the show's firing line seemed uniformly bowled over. Even the notoriously hard-to-please Simon Cowell said that the only problem with Lambert's performance was that "nobody will be able to top it."

Wonder if Slash asked Lambert to come on down for a Velvet Revolver audition? If he didn't, perhaps Jimmy Page might want to give him a ring. Stranger things have happened.