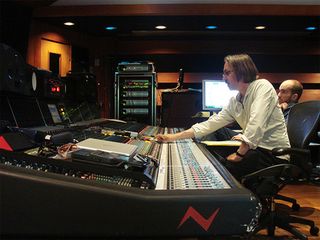 Butch Vig: doing what he does best.

You'll know Butch Vig as the producer of records by the likes of Nirvana, Green Day, Smashing Pumpkins and his own band Garbage (who he also drums for), but he'll soon by sitting behind the desk for the winner of an unusual eBay auction.

In a bid to raise money for cancer charity The Pablove Foundation, Vig agreed to auction off a full day's worth of his studio expertise (ten hours). The winning bid, which was registered yesterday, came in at a whopping $10,150.

The successful bidder will now be stepping into LA's Dangerbird Studios with Butch to work on one of their songs. Here, they'll be able to spend a day honing this to perfection, before leaving the studio with (hopefully) a track that's much improved.

We think this sounds like a great concept - let's hope other artists and producers now follow suit.