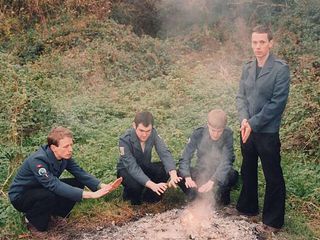 British Sea Power: soon to be chasing ducks around the highest pub in Britain

Unless you are an alien who has just stepped out of your interplanetary spacecraft, you've probably seen footage of The Beatles' last ever public concert performance on the roof of the Apple building in London.

Most people are used to hearing about bands do instore gigs at record shops, but news of the excellent British Sea Power's forthcoming festival at the Tan Hill Inn in the Yorkshire Dales reminded us that great gigs don't necessarily have to take place in regular concert venues.

The Tan Hill Inn is no ordinary pub. Indeed, at 1732 feet above sea level, it's officially the highest pub in Britain. August 29-31 sees not only British Sea Power playing three full sets, but a programme of events that includes a full supporting bill and events including husky racing, duck herding, a pub quiz and an attempt to record the loudest ever human voice.

British Sea Power will also be launching their own brand of nut brown ale at the festival. Click here for ticket information.

It's not the first time British Sea Power have performed at Britain's highest pub, and the band have also performed amongst the dinosaur bones at London's Natural History Museum, as have The Strokes.

In terms of strange concert venues, you'd be hard pushed to beat The Cramps' performance at Napa State Mental Hospital in 1978, and of course Johnny Cash's Folsom and San Quentin prison gigs.

From the sublime to the ridiculous, lest we forget Jean Michel Jarre out-Tapping Spinal Tap at the Pyramids, or Brian May failing to slip and fall off the roof of Buckingham Palace.

Share your unlikely gig locations in the comments section below…