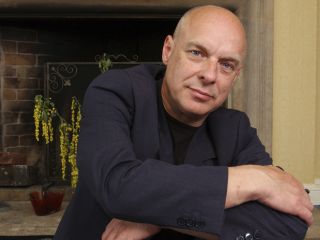 Brian Eno will release his next album on Warp Records. Details are still sketchy, but all indicators point to an Eno CD being issued on the label later this year.

The pairing of the onetime glam/art-rock keyboardist for Roxy Music, who then became the godfather of ambient music, co-inventor (along with Robert Fripp) of the tape-delay system known as 'Frippertronics' and a mega-producer (Talking Heads, U2, Coldplay) with Warp Records is notable for many reasons, not the least of which being that, without Eno, works by some of the label's biggest names like Aphex Twin and Boards Of Canada probably would not have come into being. For more information on the Eno album, click here.

The news of Eno's signing with Warp Records comes in the wake of a blog post from guitarist Leo Abrahams, who wrote, "There's an album out soon by Brian Eno, with myself and Jon Hopkins... It contains the fruits of several years of jams between the three of us. I've not heard anything quite like it-- it sounds 'live' and 'alien' at the same time. Some things have been permitted to survive, which only Brian would have had the courage to let go, and it's so much the better for it." (It should be noted that the text has since been deleted from Abrahams' site.)

Abrahams has worked with Eno on several occasions, including the Eno/David Byrne album Everything That Happens Will Happen Today. Hopkins is an ambient electronic artist who has released music on Domino, remixed Four Tet, and worked with Coldplay.

Check out the video below of Eno, Abrahams and Hopkins collaborating live last year during the Eno-curated Luminous Festival.