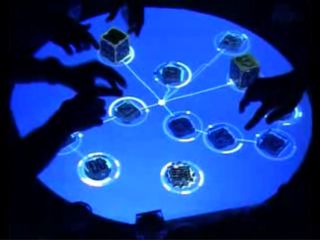 The ReacTable in action

There are many examples of odd-ball instrumentation in music from the last half-century, from The Beatles' use of the sitar and tabla, through the claim that Anton Newcombe (of The Brian Jonestown Massacre) can play over 80 instruments, to Björk's employment of everything from Inuit choirs to the mighty ReacTable.

Amon Tobin, for his 2007 album Foley Room, primarily used non-instruments for his sound sources. Instead, he decided that motorbikes, roaring tigers and even ants eating grass would provide the ideal palette. Later on, the Brazilian Drum 'n' Bass producer decided some conventional instruments would be required, so the Kronos Quartet were drafted in to add their moody string sounds, Stephen Schneider to thump some tubs and Sarah Page to add some harp sections.

There were rumours that The Beastie Boys had a robot come into the studio, where the door had to be taken off its hinges because of its size, for the intro and chorus sections on Intergalactic. For 2001's Vespertine, Björk drafted electronic wizards Matmos to stamp on boxes of salt, rattle hamster cages and rub balloons. Similarly, Leafcutter John of avant-garde jazz group Polar Bear spends most of a song letting the air out of a balloon into a microphone. Other than that, Leafcutter John also plays his mandolin and Max/MSP instruments with a USB joystick.

Then, there's locations. Sigur Rós bought a disused swimming pool in Iceland and then made it into a studio space with plenty of natural reverberation. If you believe the film 24-Hour Party People, the Happy Mondays recorded all their drum sections for an album on the roof of the studio. And, as we've already covered, David Byrne built an organ out of a building.

So, what's the weirdest instruments or sounds you've heard in music? Any mental locations? Who would get the award for most bizarre recording techniques?