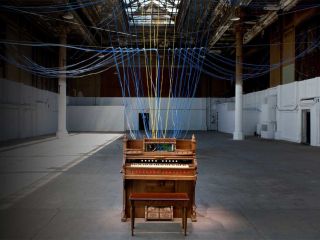 The Roof Is On Wire

The team took an old Weaver pump organ and replaced its insides with wiring, relays and hosepipes. The wires are fitted to vibrating 110v motors on each ceiling girder while an attached pump blows air through the hoses and around the building´s heating pipes and conduits. Several spring-loaded valves also point toward a huge radiator.

David Byrne has no desire to compose or perform publicly on the architectural orchestra, but hopes to change the public´s perception of popular music: “I´m not suggesting people abandon musical instruments and start playing their cars and apartments, but I do think the reign of music as a commodity made only by professionals might be winding down”.

Playing The Building is open now and all visitors get the chance to take the building for a spin. You can watch a video of the organ in action here or see Creative Time for visiting information.