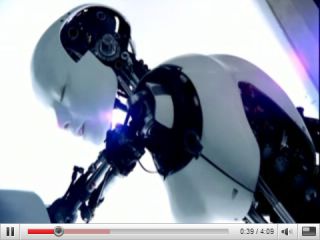 Björk's All Is Full Of Love - directed by Chris Cunningham

Film director Michel Gondry is rightly celebrated for his fantastic (and often fantastical) music videos, garnering much respect from fans and fellow film-makers alike. However, when we read Gondry's own 25 favourite music videos (in a list he compiled for Entertainment Weekly) we were struck by how many of the videos mentioned were 'classics'.

There's can be no denying that the videos to Michael Jackson's Billie Jean and Peter Gabriel's Sledgehammer are brilliant, but surely there have been some works of genius in the last decade or so? For MusicRadar, the answer is a definite 'yes' - and you can see our favourites below. Some of them, of course, are the work of Gondry himself…

Let Forever Be by The Chemical Brothers - directed by Michel Gondry
The video for Let Forever Be epitomises everything Michel Gondry is known for: surreal imagery, brilliant set design and camera trickery without the use of excessive CGI to name a few. Illustrating a girl's dream, the video builds a spectacular sense of fear and foreboding, and The Chemical Brothers' music proves the perfect soundtrack to a nightmare - in the best possible way.

Weapon Of Choice by Fatboy Slim - directed by Spike Jonze
Spike Jonze has something of a penchant for making videos that look like musicals - he directed the video to Björk's 1995 track It's Oh So Quiet too - but his video for Fatboy Slim's Weapon Of Choice is surely his best effort. Not only is it noted for its superb choreography, but also for introducing a whole new generation to the talents of Mr Christopher Walken. A generation who, presumably, think Walken can fly.

Knights Of Cydonia by Muse - directed by Joseph Kahn
Just when you think Muse can't get any more theatrical, they release a video featuring an armour-clad space princess riding a unicorn. With a nod to Tarantino's exercise-in-homage Kill Bill, director Kahn manages to fuse spaghetti-western, kung-fu, Soviet and even sci-fi influences in this epic video - and, bizarrely, it all gels quite nicely (though we don't think he'd have gotten away with it if it wasn't a Muse track...). According to a contest run by the band, there are 15 major movie references in the Knights Of Cydonia video - can you spot them all?

Michel Gondry on Fell In Love With A Girl

"Lego, the company, refused to endorse the video or help us. We had to pay for every single box we used, because they thought the music of the White Stripes was not matching their image. And then [later] they asked the White Stripes to support their brand, but it was too late. The White Stripes were not into doing that anymore. But I have to say, I'm still pro-Lego."

Fell In Love With A Girl by The White Stripes - directed by Michel Gondry
Michel Gondry is a clever-chap, and while it may seem like a simple idea at first, it takes visionary genius and daring to realise that Lego and raunchy garage-blues can fit together so perfectly. That said, it didn't take much to persuade The White Stripes themselves that a stop-motion Lego video was the right choice. Speaking to MTV, the band explained that Gondry simply brought a Lego model of Jack White's head to dinner. "You couldn't argue with that" said Jack.

Just by Radiohead - directed by Jamie Thraves
A man, walking to work and soundtracked by Radiohead playing in an apartment above, suddenly collapses on the pavement and refuses to get up. What's more, he won't tell anyone why he's lying down. Pressed, he eventually tells the surrounding crowd, at which point the subtitles, rather inconveniently, cut out. What he says has never been revealed by Thraves or the band, and it's a topic of some debate amongst fans. The best answer we've ever heard, though, is "Radiohead are rehearsing in that apartment block - let's all lie down and have a listen".

Here It Goes Again by OK Go - choreographed by Trish Sie
A subtitle at the start of this video announces 'OK Go, on treadmills' - and that's pretty much all there is to it. Four treadmills, four silly chaps in pink suits, some clever choreography and 17 takes is all it took to produce this ingenious video, which instantly became an internet smash. The most addictive quality of this video is, however, that no matter how many times you've watched it, you still catch yourself hoping that one of the power-popsters will fall flat on their face…

All Is Full Of Love by Björk - directed by Chris Cunningham
On this serene track, the closer to her 1997 album Homogenic, Björk sings that love is everywhere, even amongst the inert. Chris Cunningham's video, depicting robots in the midst of passion, illustrates this brilliantly, and MusicRadar for one didn't realise machines could be so sensual. Honda has missed an advertising trick here, we think: Rube Goldberg machines are all very well, but surely imbuing car-manufacturing robot arms with sexuality and filming them for a car ad is where it's at…

Windowlicker by Aphex Twin - directed by Chris Cunningham (explicit language from the start)
Maybe Chris Cunningham doesn't actually like Richard D. James, aka Aphex Twin. Poor-old James is regularly portrayed as a freakishly disturbing hell-beast in the Aphex Twin videos Cunningham directs - and this is certainly true of Windowlicker, in which James is depicted as a hideously wealthy superstar-freak as a parody of modern gansta-hip-hop videos. The sexual, brooding nature of the track is juxtaposed all too well by the video's disquieting images: possibly a further reference to the culture the video appears to lampoon.

Remind Me by Röyksopp - directed by H5
French studios H5 specialise in infographics - the type of diagram you find on aircraft safety cards. Not a very inspiring visual to a music video, you say? Watch the video to Röyksopp's Remind Me and think again. The systematic dissection of modern life seen here is both awe-inspiring and satisfying to watch, and it makes Röyksopp's bubbling, minimalist electronica all the more compelling.

Around The World by Daft Punk - directed by Michel Gondry
We didn't start writing this blog with the intention of making it a Michel Gondry love-in, but he's directed so many great promos that it was inevitable his name would pop up repeatedly. This clip for Daft Punk's naggingly infectious 1997 single visualises the various parts of the track's arrangement, with a different group of dancers - robots, athletes, synchronised swimmers, skeletons and mummies are all invited to the party - representing each of the instrumental elements. By the time you've finished watching, you feel that, without the video, the song simply couldn't exist.

Hurt by Johnny Cash - directed by Mark Romanek
The video for Cash's stark cover of Nine Inch Nails' Hurt hardly needs explaining: it's simply a touching yet somehow brutal film of a man in his twilight months, singing a song that seems to acknowledge his imminent demise. "I've gotten letter after letter from people saying that the video made them weep and they can't stop watching it," says Romanek. For a 'mere' pop promo, that's some achievement. Within a year, Cash and his wife June Carter Cash (also featured) were both gone.

That's our list, but what have we left out? What are your favourite music videos, and why? Let us know below…