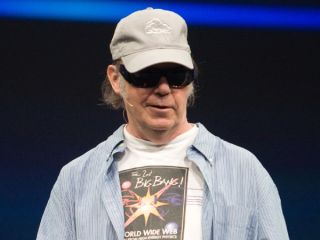 Neil Young at the 2008 JavaOne conference.

Earlier this week, Neil Young spoke about his Archives project at the 2008 JavaOne conference. This career anthology, which will feature high-resolution music and other multimedia content, is set to be released on Blu-ray discs.

In doing this, Young is bucking the trend that has seen countless established acts re-releasing material in compressed, downloadable formats. The former Buffalo Springfield man doesn´t like MP3s, you see, claiming that listening to them is “hell”.

He has form for this kind of format hating, having previously been reluctant to have his music released on CD because of what he perceived as fidelity problems.

While I respect Neil Young´s decision to stand up for what he sees as a point of principle - he´s savvy enough to realise that people will compress the Archives music anyway - I do wonder whether he´d feel differently about MP3s if he was at the start of his career. The format has undoubtedly done untold harm to the record companies´ bottom lines (and low bit-rate files do sound poor), but it´s also helped to level the playing field for up-and-coming artists who want to get their music heard.

Although the notion that you can achieve recognition simply by putting a few tracks up on your MySpace page is fanciful, what can´t be denied is that the MP3 format has made it much easier for unsigned, unknown musicians to distribute their work.

Young is in the fortunate position of having a well-established fanbase, and can pretty much guarantee that plenty of completists will be happy to pay good money for the Archives collection.

The challenge for new acts, though, is to get their music into the hands of as many people as possible. They´re not in a financial position that enables them to dismiss the MP3 format on the grounds of quality: what´s more important to them is that their music is easy to distribute and can be played by anyone.

If an artist´s first album was a Blu-ray-only release, I can say with some confidence that it would be their last.

MP3 may not be perfect (indeed, there are better compression systems already out there) but its ubiquity and convenience make it the perfect format for new musicians. To paraphrase Lynyrd Skynyrd, I hope Neil Young will remember that.