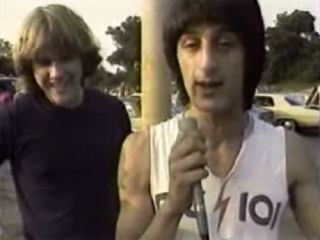 The kind of frequency that could kill weeds

The other day I was getting rid of some old junk on a bookcase to make room for some new junk and I came across something I hadn't seen in a while, my VHS copy of Heavy Metal Parking Lot. "Sweet Jesus!" I cried. "I've gotta watch this again - like, right now!"

For those of you who haven't seen this nifty little cult classic, it's pretty much what it says it is - a gathering of metal fans, pumped, primed and, in some cases, near comatose, doing what metal fans do best: hanging out, drinking beer and effusing wildly about the glories of metal. It was directed by Jeff Krulik and John Heyn, both of whom had the shrewd sense to scope out the choicest of locales in which to document this microcosm of society: the parking lot of the Capital Centre in Largo, Maryland, in 1986, hours before Judas Priest were to take the stage.

As I made myself a decidedly non-heavy metal pre-screening beverage (a gin martini, straight up), my mind clicked through the assortment of Devil's horn-waving friends that I'd made the first time I watched the film. Surprisingly, through the fog of time, most of Bud-and-bong-loaded bunch seemed to be variations on the same theme. There were your basic burnt-out metal dudes (no shirt, mullet, thin moustache, half-lidded eyes, Bud in hand); your jock-type metal dudes (muscle shirt, mullet, cock-tight acid-washed jeans, Bud in hand); and, of course, your metal chicks (zebra-striped top, spandex pants, blue eye shadow, Bud in hand). Years ago, they struck me as being hilariously funny and borderline appalling, the men squaring off and arguing who was the best guitarist in heavy metal (they would usually back up their statements with air guitar demonstrations of their heroes), while the women seemed hell-bent for both leather and the need to award sexual favors to anybody with a laminate. I made my drink quickly, for I couldn't wait to travel back in time to see my old pals.

And through the magic of half-inch tape, there they were! Like David, Bud in hand, sporting aviator shades, a muscle shirt and one of those Mike Reno handkerchiefs around his neck that were all-too-popular in the '80s. He's a little slow in the thinking department, but he has his 13-year-old girl, Dawn, by his side. Dawn is decked-out in zebra stripes, and she's totally fried. But boy, does she loves her man Dave, whom she says is off to the air force in a couple weeks. I was touched by her devotion to him, especially when she gives him a big sloppy French kiss - a nice touch.

Then there's Gram - "as in gram of dope." Stick thin, shirtless, beer in hand, Gram reminds me of a cross between a young Malcom Young from AC/DC and an even younger Jackie Earle Haley when he was in Breaking Away. Gram has a weird accent, not quite Southern but not Eastern either, sort of like he's stuck between two worlds. When he proudly asserts his moniker, "Gram of dope," it sounds as if he's saying, "Gram of dowp." I couldn't help but wonder what he's doing now. Maybe he'll be hitchhiking to Ozzfest this year, hoping for yet another camera crew.

The "Hell Yeah" chick made me smile from ear to ear. Her hair is a giant ruby shag, and her gleaming braces seem to impede her speech more than the beer she was drinking. But nonetheless, she's there to "part-ay!" When the the interviewer asks Hell Yeah what she would do if Rob Halford happened to walk by, she immediately says that she would "jump his bownes." I wonder if she ever found out that such an act would have made no impression on ol' Rob at all.

I chuckled warmly at the sight of the two surly dudes holding court by their run-down car. At 21 and 19, they were concert vets - both of them had seen Priest "like five or six times." But these are no hair metallers, these guys: one of them wears a "Kill 'Em All, Let God Sort 'Em Out" t-shirt that he probably got from his brother (who probably bought it from the back pages of one of those commando-type magazines).

The sight of the Lone African American almost brought a tear to my eye. That he was at a heavy metal concert in 1986 in Maryland surely suggested a progressive spirit, but he could still bring it old school when necessary, as was the case when the interviewer said he was being filmed for MTV, to which my man simply answered, "Bull...shit!"

But the real star of Heavy Metal Parking Lot cannot be disputed. For my money, it's all about the Steve Perry Wannabe. "Holy cow!" I said out loud, almost spilling an olive from my martini. I totally forgot about this joker. The Steve Perry Wannabe - his hair is done in Perry fashion to a T - is hanging out by himself, apparently friendless, and in a moment that will forever live in video infamy, grabs the interviewer's mike and lets loose with an overly enthusiastic, screeching a cappella version of Living After Midnight. His voice is absolutely poisonous, the kind of bizarre frequency that could kill weeds. All around him, people either laugh or duck for cover. Priceless stuff.

Pulling out the tape, I felt a sudden twinge of sadness. Like turning the pages of a yearbook, I had seen faces I hadn't thought of in years, heard sounds that sounded as familiar as the ocean surf. Where was the Hell Yeah girl now? What was the Lone African American doing? Did the Steve Perry Wannabe ever get the beat-down he so richly deserved? And what about David and Dawn, did their incredible love story live on? Draining my martini, I made an important decision: Heavy Metal Parking Lot was going back on the shelf, spared from the bottom of the garbage bag. It's an important time capsule, and one I know I'll be digging up again much sooner than later.