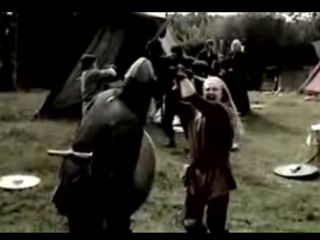 If your idea of a good time involves church burning, grave desecration, Satanism and other assorted nastiness, then have we got a film for you: Black Metal Satanica.

According to the film's synopsis, the picture documents how "the modern Vikings of Scandinavia took the music genre 'black metal' to its darkest abyss in the mid-'90s and turned words into action and declared war against Christianity, and it all started a thousand years ago, when the Vikings ruled the North."

Hey, whatever floats your boat, right? The documenary includes interviews with bands such as Watain, Dark Funeral, Shining, Vreid, Rimfrost (we love that name, by the way) and Mordichrist.

Check out the film's trailer here.

Don't go looking for Black Metal Satanica on a double-bill with Wall-E anytime soon. So far it's only screening will be at Laemmle's Sunset 5 Theatre in West Hollywood, California on Friday, July 18 at 10:00 p.m. See you there?