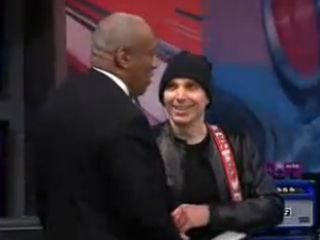 Cosby and Satch - a new musical force in the making?

Comedy legend Bill Cosby was so taken by Joe Satriani's playing last night (29 November) on The Tonight Show that he decided to hit the keyboards and do a little jamming with the guitar master.

Satriani was sitting in with Rickey Minor and the Tonight Show Band throughout the program, and during a commercial break, Cosby, waiting to be introduced, was overwhelmed by their rendition of Satch's God Is Crying (from his new album Black Swans And Wormhole Wizards). Upon his entrance, Cosby took it upon himself to join the group for a most unique musical interlude.

Quite honestly, this is one of those situations where a picture (or in this case a video) is worth a thousand words, so check it out and enjoy!