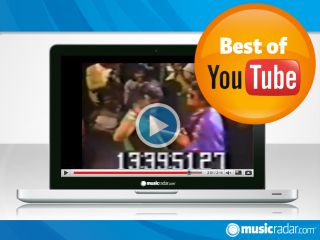 "Hi James. I've improved all of your dance moves"

This week we've unearthed a classic live clip: The King, The Godfather and The Prince all on one stage, at the same time. No, we couldn't believe it either.

Chris Knox - Not Given Lightly

The sad news that New Zealand lo-fi pop legend Chris Knox has suffered a stroke is tragic enough. However it's especially ironic given the current heightened interest in Flying Nun (Knox's old label) from hip blogs covering such new Flying Nun-influenced indie acts as Eat Skull, Times New Viking and anyone else on the rather fine Siltbreeze label.

In no way a memorial but just a reminder of how much this man deserves your attention (ill or otherwise), we present one of Knox's finest tunes - a pure, heartfelt pop song that, bizarrely, was once voted New Zealand's thirteenth best song of all time. And if you think this song's good, check this one from his old band Tall Dwarfs.

Interested parties should go to the brilliantly named 'Chris Knox had a stroke and everyone wants to know how he is, how the hell are we gonna keep you all updated all at once' blog set up by Chris's friends and family. Mike Goldsmith

Foo Fighters cover You're So Vain

For some reason, Carly Simon's original is my seven-year-old daughter's current favorite song and she makes up her own inventive lyrics ("cows in my toffee, cows in my toffee"). But Dave Grohl and co kick a donkey's ass on this wonderfully unironic version. And check out Taylor Hawkins owning his drums. The guy uses three ride cymbals instead of crashes - and sounds supreme. A great song spans decades. Joe Bosso

The Raconteurs perform Consoler Of The Lonely on From The Basement

With Glastonbury on the horizon, thinking back to last year's festival I remember an extremely straight friend of mine turning to me and proclaiming, "I think I'm a little bit gay for Jack White" midway into The Raconteurs' set. Thinking back to that afternoon and White, Benson and co's kinetic synthesis of the best elements of Zeppelin and The Who, it's difficult to imagine a live rock band ticking more boxes. Check out more of their excellent From The Basement performance here. Chris Vinnicombe

James Brown, Michael Jackson and Prince on stage together

I really don't know how this has passed me by until now. It starts with James Brown, who gets Michael Jackson on stage to sing and dance a little bit. Then, at MJ's insistence, Prince is hauled up there (on someone's back, naturally), to play guitar, take his top off, squawk, kick the mic stand a couple of times, knock down a piece of the staging and look freaked out. It's been described elsewhere as "the greatest video on the entire internet", and based on a set of criteria I haven't quite worked out yet, it is. Ben Rogerson

I know it's still a week to go, but I really am that excited about Glastonbury. After scrolling through the mammoth line-up again, I've just noticed these guys will be there… Last year, The Hot 8 Brass Band's New Orleans-style take on Marvin Gaye's Sexual Healing wasn't a tune you'd expect to hear on the dance floor, but DJs took to it in a big way (notably DJ Yoda who played it in his mix for Fabric live). I'm going to go ahead and say - over 18 months since its release - it's played out now, but we can still safely Rock With The Hot 8 instead. Jon Sherrard

There were some pretty astounding acts at this year's LIMS - but for me, Steve Smith's one man (but multi-drummed) show was the gig that left me the most flabbergasted. It was this track in particular that did it - Smith's quintuplet-derived playing here is based on note divisions of 5, rather than the more usual 4 found in most Western music. It's a tricky one to get your ears around - but, I'd imagine, even trickier to play. Chris Wickett