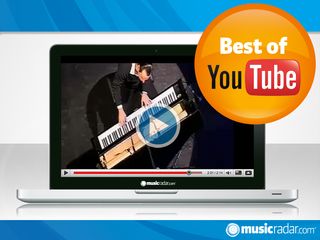 Gonzales reckons he can play for 27-hours. We'll book our ticket (ahem)...

This week we're donning our party hats to celebrate Brian Eno's birthday, readying our stopwatches to time Gonzales's 27-hour playing record attempt and standing a fair distance away from the speakers in order to enjoy some drop-G Oceansize mentalism without spoiling our trousers.

Which, actually, is a bit of a weird image... Oh, and make sure you scroll right to the bottom for some of the most ridiculous microKORG playing ever.

Brian Eno and the birth of 'ambient'?

Brian Peter George St John le Baptiste de la Salle Eno is 61 years old today. To some he's a genius, to others he's a charlatan. But this vintage interview (with soundclips) about his Music For Airports at least shows he thinks hard about music and its role. Happy birthday, Mr Egghead. Michael Leonard

Gonzales at the piano

On Saturday, versatile entertainer Gonzales will attempt to break the record for the longest solo concert in the world by playing a marathon 27-hour stint. You'll be able to watch clips of the gig on his website after the event, but here's just a short taster of what he can do. Ben Rogerson

It's the weekend - and what better way to unwind than to sit back with a cup of tea and listen to a bit of Oceansize? This track is particularly relaxing - it's in drop G (yep, G) and contains, supposedly, the longest-held recorded instance of the word 'c*nt'. Kick off your slippers and enjoy! Chris Wickett

Next page: Uncle Tupelo, Elton John and the mentalist microKORG playing ever!

During the '70s, Don Cornelius's Soul Train was 'the hippest trip in America.' But in music as in sports, somebody has to break the color barrier, so on 24 May 1975, Elton John became the first white performer to appear on the show, lip-syncing his way through Philadelphia Freedom. Which just proves one thing: You want soul? Go get a white British guy named Reginald. (Trivia: the next year, David Bowie became the show's second white performer.) Joe Bosso

With the evil Interweb bringing the release of the new Wilco LP forward, now is perfect for a look back at where it all began for frontman Jeff Tweedy and then-chum Jay Farrar. Uncle Tupelo were a staggering band - as Rolling Stone said at the time, they were Hüsker Dü playing Hank Williams songs, they invented alt.country and, with this song, named both a magazine and an entire musical movement in one swoop. Wilco are good but Uncle Tupelo? Uncle Tupelo were genuinely ground-breaking… Mike Goldsmith

If Austrian beatsmith Dorian Concept considers this 'fooling around', what happens when he takes things seriously may be too much for my inferior brain to handle. Make sure you check out his other videos - but here's the pick of the bunch: watch the Viennese glitch-hop purveyor killing it in his bedroom, microKORG-style. Jon Sherrard

All hail the enduring appeal of the Talk Box. Auto-Tune, bow down!