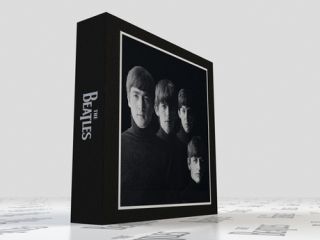 On 9 September, The Beatles' remastered catalogue finally arrives. To commemorate the event, The Beatles and Apples Corps. have announced a deluxe companion set called Box Of Vision for fans to store the upcoming releases.

Box Of Vision is more than just a handy-dandy carrying case, however: The set also features a 200-page LP-sized book featuring all of The Beatles' artwork - we're talkin' covers, gatefolds and inserts from both the US and UK releases - covering every album from Please Please Me to the Beatles Love compilation.

Beyond that, Box Of Vision will also include a complete 'Catalography,' featuring all the track lists and other information from every release, along with a new essay from Beatles historian Bruce Spizer.

Of course, the centerpiece of Box Of Vision is the storage book kit itself, which will allow fans to organize and display all 32 discs of The Beatles' core catalogue. Fans may insert CDs and booklets from their existing collections or the new digitally remastered versions.

"It's the ultimate fan piece," says Jonathan Polk, who conceived the Box Of Vision. "I have always been frustrated with the available options for organizing and storing CDs. And,I hated the fact that the beautiful LP artwork I grew up with was reduced to almost postage stamp size on CDs. The Box Of Vision gives fans the best of all worlds."

Wonder if Polk has a similar storage set for The Beatles: Rock Band - also coming out on 9 September. What a coinky-dink, huh?