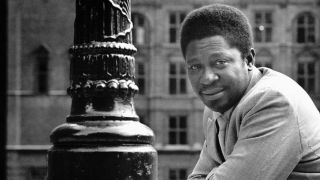 We were sad to report the passing of BB King this morning, aged 89. A huge number of guitarists from the blues and all genres of guitar playing have now paid their respects to BB online - we've shared a selection of tributes below.

"This morning, I come to you all with a heavy heart. BB King was the greatest guy I ever met. The tone he got out of that guitar, the way he shook his left wrist, the way he squeezed the strings... man, he came out with that and it was all new to the whole guitar playin' world. He could play so smooth, he didn't have to put on a show. The way BB did it is the way we all do it now. He was my best friend and father to us all.
I'll miss you, B. I love you and I promise I will keep these damn Blues alive. Rest well."
Buddy Guy

"God bless you BB... Rest in peace my friend. Thank you for all that you did for this kid... my condolences to his family and band."
Joe Bonamassa

"Immensely saddened by the passing of BB King. He was a true gentleman. My favorite blues guitarist and I am truly honored to have known him."
Slash

"Sad to hear B.B. King has left us. I loved collaborating with him, loved his music, & his spirit. He changed music forever. God bless him."
Brad Paisley

"So sad to wake up this morning and hear the news about the passing of the great B B King."
Joe Perry

"So saddened to hear of the death of BB king . To me , he was the greatest bluesman of all time -- we all live in his shadow - his work will stand forever -- it will never be matched . He was also the kindest , most humble man I ever met . Say goodbye to the blues."
Walter Trout

"Farewell BB King. You were like a father to me in many ways over the years. The world is a much better place because you were here. Rest In Peace my friend. The Thrill Is finally Gone. #BBKing #RIP"
Kenny Wayne Shepherd

"RIP BB King.
The blues will never be the same without you but the music we all learned from you will remain forever. God Bless."
Steve Lukather

"Rest in peace bb you inspired me so much #sosad"
Orianthi

"BB, anyone could play a thousand notes and never say what you said in one. #RIP #BBKing"
Lenny Kravitz

"RIP BB King, one of the best blues guitarists ever, maybe the best. He could do more on one note than anyone. #respect"
Bryan Adams

"RIP BB King. A legendary guitarist who has influenced many over his time."
Max Helyer, You Me At Six

"Today the world lost one of the greatest gifts to music. The great B.B. King Rest in peace brother."
Black Stone Cherry

"Can't express how saddened I am to hear of the passing of B.B. King. A huge legend and inspiration, so thankful for him. Rest in Peace."
Hozier

""Up on a mountain
I'm drowning in the sea
All the clocks say midnight
When the blues come over me"
Rest in peace, B.B. King"
Alexander William, All Time Low

"RIP B.B. King :( your music will never die! One of the first guitarists I learned about as a kid! #BBKing Jbx"
Pulled Apart By Horses