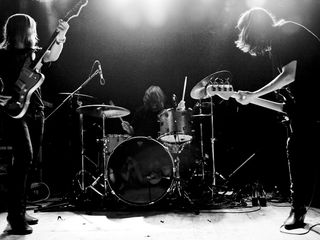 Band Of Skulls have a wild, kung fu-themed video for The Devil Takes Care Of His Own (Image credit: Simone Cecchetti/Corbis)

So we're especially pleased to learn that the band's sophomore release ("eagerly awaited," "highly anticipated" are the proper adjectives to be used here) titled Sweet Sour will be issued on 21 February 2012 via their own label, Electric Blues Records (licensed to Vagrant in the US).

Following the success of Baby Darling Doll Face Honey, the group retreated to a studio in Norfolk UK to begin writing Sweet Sour. They returned to their home studio in Southampton to start the recording, which they completed in Wales at Rockfield Studios. Sweet Sour was produced by Ian Davenport (Supergrass, Badly Drawn Boy) and mixed by Nick Launay (Arcade Fire, Yeah Yeah Yeahs, Arcade Fire).

In December, Band Of Skulls will release the single of the album's title track, but prior to that, they've dished out a blazing little number called The Devil Takes Care Of His Own, which you can check out in the above video. (Thumbs up on the ass-kicking and kung fu action!)