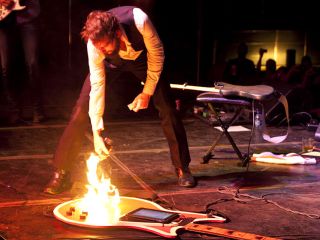 Anyone saving their pennies for an iPad might want to click somewhere else, or at the very least, watch the following clip through their fingers. For reasons best known to themselves, awesome indie rockers Band Of Horses decided to attach an iPad to a giant guitar, and subsequently torch it onstage at a recent Memphis live show.

Here's frontman Ben Bridwell doing his best Jimi shortly before setting the iPad guitar alight onstage at the end of the band's set at the Beale Street Music Festival on 2 May:

Now watch as it burns!