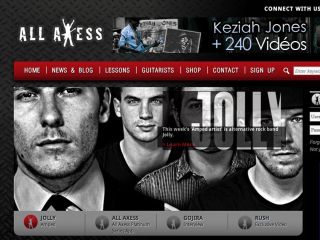 Packages range from $5 for an e-book and email to $5,000 for a songwriting and recording session

PRESS RELEASE: All Axess was founded by DevilDriver's Jeff Kendrick and Mike Spreitzer and revolves around a distinct philosophy: bridging the gap between the creators of music and their loyal fans.

In the past two years, All Axess has become a force on the web with many famous guitar players being interviewed and giving filmed lessons, which in turn has grown the fan-base for the site dramatically.

With this growing fan-base in mind, Jeff and Mike spotted a gap in the app market that has been overlooked - and it is with this in mind that the All Axess is pleased to announce their plans to bring their approach to learning guitar and the music world direct to your mobile device!

The All Axess application will provide subscribers with exclusive lesson series by their favourite guitar players, as opposed to individual lessons or segments, and they are enabling their vision for this app by launching a campaign with the world's largest self-serve open-funding platform, IndieGoGo.

Since its founding in 2008, IndieGoGo has distributed millions of dollars to over 24,000 campaigns in 159 countries and depending on the level of pledge funds achieved in the All Axess campaign, the app may also contain performance-grading software for the user, which would provide a clear and concise grading of their guitar playing.

Jeff explains why All Axess decided to pursue the app:

"Our goal is to provide a service for the All Axess member that exceeds the standards of other educational applications. After years of research and educational study, we concluded that there is a lack of apps for individual musicians to educate their fans with lessons, in order to provide insight and an interactive glance into their daily lives.

"Our goal is to offer an insight in to your favourite musicians lives like never before. Believe it or not, most musicians actually enjoy engaging with fans on a daily basis. All Axess is trying to make this interaction more fun, exciting and informative than has ever been possible up until now."

All Axess came about when Jeff and Mike identified that their experience of being in touring and recording bands could help both fans and artists bridge the gap between both in a way that is both interactive for fans and financially viable for the artists who have signed up to the service. Jeff explains:

"The declining financial nature of being a musician has compelled us to create a service that can help musicians world-wide. We have created a new revenue source for all of our friends and colleagues. As the music industry further changes we, out of necessity, must create new opportunities. We have embraced technology and pulled together our resources to bring forth a new learning tool and a new interactive community."

With a great roster of musicians lined up who are excited to exclusively share their skills and daily life experiences through social media, All Axess is proud to announce that for the first All Axess Artist segment, they are working with Bring Me the Horizon's Jona Weinhofen.

The funding will be used to develop his app and film a series of lessons - through All Axess, Jona's fans will now have more insight into his lifestyle, as well as learning his skills on the guitar, which will also include learning how to get his signature sound. The All Axess app is sure to be one of the most formidable apps on the market.

Check out the variety of special gift packs that are available for the launch of the project by clicking here. These include an ESP Willie Adler signature series guitar (personally signed by Willie from Lamb of God), 'The Hollywood Experience' whereby DevilDriver's Jeff and Mike pick you up from the airport in a limo and you get the opportunity to talk about all manner of guitar-related stuff while they take you round the Strip's rock hotspots, or an extra special package whereby Mike Spreitzer will help you co-write music and even play guitar on your record! There are plenty of cheaper packages available for those who want to get involved but only have a little to spend.

Donate to the All Axess IndieGoGo campaign