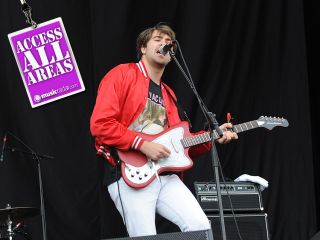 In an exclusive series on MusicRadar, Access All Areas brings you an invaluable insight into what it takes to tech at festivals, how to survive one of the toughest days of your working life, and when to stand back and say, 'job well done'.

The latest in a series that has so far included U2, The Killers and Slipknot among others sees us check in with The Vaccines.

The Vaccines have blown up since 2010, and have already garnered a reputation for an explosive live show, making them a tantalising prospect for festival goers this summer. Backline tech Chris Shipton adheres to an 'all hands on deck' mantra when tech-ing for The Vaccines, getting his hands extremely dirty during each single show.

As backline tech, Chris takes care of every instrument and then some."I've been professionally tech-ing for seven years and have experience with all instruments, but I've been looking after musicians and making gigs happen since 1997," laughs Chris.

Besides his current job, Chris has tech-ed for The Cribs, plus other current favourites Frankie & The Heartstrings, as well as Ladytron and The Thermals (Chris was their tour manager). Making The Vaccines feel as comfortable as possible on a festival stage is one of Chris' main priorities, and here he tells us how he does it.

What are the main differences between tech-ing at a festival compared to a normal Vaccines gig?

"The main differences are the amount of time and space you have to work within, and the fact that every band is effectively headlining their own time slot.

"This means that every tech has to work to ensure that the band they are working for has the best possible stage layout, and that they feel as comfortable as possible when they walk out onto a stage that they have not seen before the show."

How do you make the band feel comfortable on a festival stage?

"I make sure all their gear is working and sounding as it should, and making sure there are no leads or stands that they are going to trip over. When the band are on-stage, it's important to keep eye contact with all members so that if they have a problem they can tell me quickly and I can try to resolve it while they keep the show going.

"This comes down to knowing a bands signals and understanding certain gestures that they make, and them having the assurance that you can understand what they mean quickly so that the audience doesn't notice that anything is wrong."

What problems can a lack of soundcheck at a festival cause for you, as a solo tech?

"A whole world of problems! If you have a monitor engineer on tour he can sort out a lot of these problems, but I've had to deal with numerous festival gigs without a monitor engineer. That means I have to set the stage for the band, as well as trying to sort out their on-stage sound. That can be extremely difficult when you're just one person on-stage.

"I have learned to second guess this. When you stand in front of the guitarist's monitor and its deafeningly loud, you have to remember what else is going on on-stage and judge if that sound will mix with everything else."

What have been your best, and worst, festival tech-ing experiences to date?

"The worst was at a festival with The Cribs in Seoul, South Korea. We arrived after no sleep from a tour in Japan, and spent a good few hours talking to various stage techs and stage managers about how we were setting up.

"When it came to our change over time, these discussions disappeared and suddenly we had to set up in an entirely different way. Anything I set out on-stage, someone else came to move and rearrange it.

"The band then went on with the worst monitor mix in the world. It took until the third song before someone admitted that the monitor engineer couldn't really understand English, so I had to find a translator to help me!

"The best experience has to be The Cribs Leeds festival appearance in 2008, on the Radio One/NME stage. We were running late and the stage manager pulled the power on-stage and out front during the start of their last song, I'm A Realist.

"All the power went down, but the band got to stand on-stage and listen to a whole tent full of people sing the rest of the song back to them. It was amazing to watch."