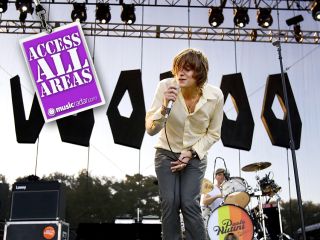 Following on from U2, The Killers and Slipknot, here are two of the key players who keep the Paolo Nutini show on the road...

After a hiatus between 1997 and 2003, backline tech Malcolm Stevenson has worked for a host of genre-defining bands including Idlewild, Interpol, Echo & The Bunnymen and Mogwai. With nearly 10 years experience to share, Malcolm's approach to tech-ing involves preparation, an ability to think on your feet, and remembering to enjoying the moment when your work at a festival is done.

An optimist when it comes to placement on the festival bill, Malcolm can see the benefit in being either top or bottom. "If you're first on, you can get a soundcheck (sometimes) and it's an early finish with afternoon beer and associated jocularities." He reasons.

"If you're the headliner, you can get a soundcheck and you'll have more clout with the stage manager. Plus, by the time you finish, the backstage area should be empty and it will be easier for you to pack your gear."

When heading out to a festival, what items do you stock in your tech kit bag?

"If we're flying to a gig, it's basic. I always take a little tool kit that I got from Lidl. It's got a screwdriver with all the bits, snips and pliers that I need, plus I've added some graphite and a truss rod tool. I always like to have a little neck stand and my bizarre gel wrist rest to lie guitars on. And Gold Bond.

"If we're trucking, I've got all sorts of shit. The most essential item for me is my tuning set-up. I run three tuners and have a headphone mixer for listening to the band and whichever guitar I'm tuning."

How do you get your hands on replacement gear when tech-ing at a festival?

"I try not to. You're at the mercy of the local crew who can either be very helpful or not. The runner is the most important link to gear, though. If you need something, get your request in early. Their services get pretty stretched by the time the band arrive."

What does your day involve when tech-ing for Paolo Nutini at a festival?

"Before I leave the bus I make sure I have my pass, bus key and my mobile. I try to find a clean serviceable toilet, then I'll check out the stage. I'll try to find the stage manager to confirm what info they have been given about our requirements, and then alter them to what we actually need. It's possible that they have been given the spec for an ancient incarnation of our set-up.

"I establish a time for load-in then bugger off out of their way. Next, get the truck tipped, set-up the gear and be as prepared as possible for the roll round. It's amps out, get everything wired up, restring guitars if necessary and get them played in. Then it's roll round, try not to bollocks anything up, gig over, repack truck, do a comprehensive idiot check, try to get a shower and go get bevvied."

What are the potential problems that arise when tech-ing at a festival?

"Weather can make it wet or cold or hot and difficult to tune. You just have to deal with it."

What has been your your worst festival tech-ing experience to date?

"Benicassim when the barrier collapsed and the previous band went off for 15 minutes then came back on and completed their set. I was categorically assured that I would still have the same amount of time for my changeover.

"As it turned out, I only got 10 minutes of the 30 I was promised. I was up to my neck in gaffa and set-lists when the band appeared on-stage. We didn't have time to retune anything, but no-one lost an eye."

What advice would you give to a new tech working their first festival this summer?

"Hang on to everything you need. Have sharpies, PVC tape, your pass, meal tickets and a torch with you. Look after your phone. Keep an eye on your gear. Establish where your empties are going to be when you come off, and don't let anyone take stuff away without you knowing where it's going.

"When you've packed, have a proper look for any equipment you might have missed. Really look. Don't necessarily assume that if something isn't left on the stage that it's been packed. Remember to get back anything that the band may have taken away to the dressing room (spare guitars, etc).

"Finally, don't assume that you're going to have time to do something later. If you do something right there and then, you can forget about it."

Backline tech Brian Caroll has been tech-ing for an unbelievable 28 years with a diverse range of bands including the Pixies, The Waterboys, Skunk Anansie, Del Amitri, Ray Davies, Placebo and The Proclaimers.

In charge of stage left, Brian tells us that his job at a festival or tour is to "look after stage left, which means I set up the drum kit, keyboards, bass rig, and I also do Paolo's guitar."

After starting off on drums and swapping to guitars, Brian now techs for both instruments. While he enjoys his work, Brian isn't a fan of festivals, as he tells us before dishing out some sage advice: "I really don't like festivals. Crap food, crap toilets, crap showers and constant loud noise. They should be banned. I'd say, get some Gold Bond, earplugs, and hide some beers from the dressing room before the band go off stage!"

What are the worst aspects of tech-ing at a festival?

"At festivals you are at the mercy of the weather, which can be a nightmare. Rain and electricity does not mix! The lack of soundcheck means that problems can occur just before the band go on-stage, instead of being identified and rectified at soundcheck. Also if you're headlining the festival, you load in at stupid o'clock, set up, roll it back off the stage and then hang around for 12 hours until stage time."

What are the main items in your festival tech arsenal?

"I use two tuners, a Peterson strobe and a Boss TU-2. A string winder (or power screwdriver with winder attachment), snips, drum key, screw drivers, multi meter and a Sharpie. I also use a Dean Markley acoustic pick-up to tune acoustics when there is a lot of background noise (unfortunately it doesn't work with Paolo's nylon strung guitars). The most important item is a good supply of Gold Bond... everyone knows why."

What is the first thing you do when you arrive at a festival?

"I try to get access to some space and get the risers set up, then unload the truck. I'll set up the drums and tune them, set up the keyboards and the bass rig, and get the guitars out.

"After everything is set up, I'll clean and change the strings on any guitars that require it. Then at change over, we'll roll our backline onto the stage, set it in position, switch it on then line check and hope everything works.

"I also have to put out the set list, towels and drinks. During the gig I keep my eye on Seamus [Simon], the drummer, and the rest of the guys on stage left. I also do Paolo's guitar changes, so most of the time I'm tuning the next guitar he will need."

What about after the show - breaking down and packing up?

"Well, after the gig I'll shout random instructions in a broad Scottish accent to the local crew who will wonder what language I'm speaking, while they try to put empty cases on the truck.

"Once the truck is all packed, I'll go to the dressing room to find that the band have drunk all the beer, then go for a shower which will either be freezing cold, boiling hot, or the pressure is so low that you have to run around in the shower to get wet. I then have a beer on the bus and go to bed, just to do it all over again the next day."