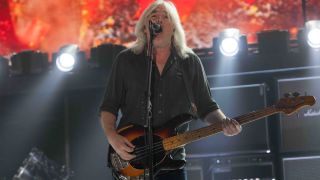 AC/DC's future has once again been called into question as bass player Cliff Williams has announced plans to retire following the rock legends' current world tour.

Speaking to Gulfshore Life magazine, the bassist said recent drama within the AC/DC camp had influenced his decision.

"It's been what I've known for the past 40 years, but after this tour I'm backing off of touring and recording," Williams says.

"Losing Malcolm, the thing with Phil and now with Brian, it's a changed animal. I feel in my gut it's the right thing."

Founding member Malcolm Young left the band in 2014 owing to a dementia diagnosis, while Phil Rudd departed the following year after pleading guilty to charges of threatening to kill a former employee.

Back in April, Brian Johnson was forced to step out from live shows owing to hearing problems, leaving Guns N' Roses diva Axl Rose in the singer spot - although Johnson has since hinted that a new in-ear monitoring rig could provide the key to bringing him back to the stage.

Reviews have been positive for Axl/DC so far, but Williams' latest revelation may be one blow too many for Angus Young's Aussie rock heroes. For those about to retire, we salute you…