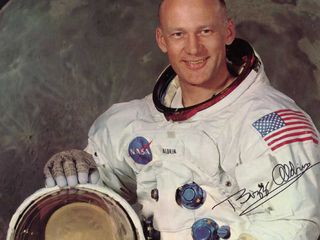 Buzz Aldrin, man on the moon

Astronaut Buzz Aldrin and Snoop Dogg have collaborated on a new hip-hop track.

Aldrin is the famed NASA astronaut who was the second man to set foot on the moon, in 1969. But at 79 years of age he obviously wants a new challenge. So he's cut a rap track with help from Snoop Dogg, legendary producer Quincy Jones plus rap stars Talib Kweli and Soulja Boy.

The 79-year-old calls himself Doctor Rendezvous on the single, called Rocket Experience.

He raps: "I'm the spaceman, I'm the rocket man, it's time to venture far / let's take a trip to Mars, our destiny is to the stars."

Proceeds from the song and video sales will go to Aldrin's non-profit foundation, ShareSpace, which supports space education and advocacy programmes carried out by the National Space Society, the Planetary Society and the Astronaut Scholarship Foundation.

It's not Buzz's first encounter with hip-hop, of course. Here he shares street knowledge with Ali G.

We're not sure who's the joker anymore…