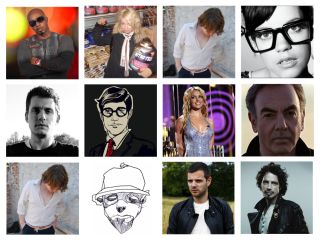 First of all, let's get the introductions out of the way (all hail Wikipedia!): "Twitter is a social networking and micro-blogging service that allows its users to send and read other users' updates (known as tweets), which are text-based posts of up to 140 characters in length".

Imagine the best thing about Facebook - the humble status update - without all that other crap dragging you down. Twitter is quick, Twitter is simple, and with all the recent media attention (thanks, Stephen Fry) there has never been a better time to jump onboard. And when you do, here's 27 ways to engage.

But those who've already taken the plunge know it can be a desolate place if you've got no mates. And a boring one. So we've compiled a list of the 21 artists, rockstars and musicians who are actually worth following. They're the Twitter-elite with something to say - whether it's an insightful peak into their lives on the road, the latest studio sessions or what they've just eaten for breakfast.

And don't pretend you're not interested in the latter…

21. Chris Cornell
Reads like a list of interesting observations: "I just saw a squadron of helicopters. They look scary in a group. Nothing positive is happening when helicopters are in groups".

19. Pete Wentz (Fall Out Boy)
Pete probably tried to set this up anonymously, hence the clever backward username (ztnewetep) and the rather strange bio: "Not really trying to be found. Being lost is kind of too teenage though. It's more on the lamb now."

18. Britney Spears
Among the management/PR Tweets are a few gems from the fallen Princess Of Pop herself. Is it really her? Who knows. Who cares? "I had a nice, restful evening and got a great massage last night. Brit"

17. P Diddy
If this is the real P Diddy, it's exactly the kind of peep-show we've been praying for for all these years: "Taken a bubble bath holdin a Oscar!! God is great let's go people".

16. Chris Cain (We Are Scientists)
Random thoughts on anything that comes to mind. Dig deep and there's some music-related Tweetage in there somewhere.

14. Neil Diamond
Lots of Tweets about hugs and sunshine in LA: "I made someone's dream come true with a hug. Life is good (and the sun shines in L.A.)". See?

12. Jamie Cullum
Live Tweeting from the Brits after-party is very cool: "Gary Barlow sang Back For Good with Coldplay who managed to play it without a trace of irony."

11. Stuart Braithwaite (Mogwai)
The guitarist just seems to get what it's all about - opinion: "Just saw some 'reviews' of the Yeah Yeah Yeahs' album by folks who'd listened to 5 songs illegally. F*ck the internet. Seriously".

Why? An unlikely Twitter hero, the Hammer man is proof that you don't have to be current (or even relevant) to get involved. Very active and engaged with his followers, and, who can honestly say they don't want to know what Vanilla Ice is like these days?

Tweet of the week: "Top 5 things to do today: 1. Gym 2. Production meetings 3. Dancejam 4. Rehearsals 5. Be grateful and appreciative to be among the living".

Who? Long-surviving noise-rockers from NYC.

Why? While approaching the generic 'band' Twitter feed with caution, it's clear that one unnamed member of Sonic Youth - or, at the very least someone very close to the band - likes to Tweet tasty morsels from the studio.

Tweet of the week: "'anti-orgasm' mixed, spent some time w/ Matador folks and Sam. Now we're ready for a busy weekend of mixing."

Why? When you compare the three Twitters Dave follows (two of which are Barack Obama and CNN) with the 100,797 Twitters following him, you might assume a lot of singular Tweets to follow. But, actually, he's surprisingly engaged with his audience.

Tweet of the week: "The album will probably be a little late. But not for a lack of effort. Work work work. Today I am not fond of myself. Ugh. Good music tho."

Why? Underneath that sarcastic, confrontational exterior is a sarcastic, addicted blog-hound. Well known for bitching on MySpace, Ms Allen's made the transition to Twitter with hilarious results.

Tweet of the week: "Today has been odd. I did an interview in a spaceship and went on what looked like a Japanese version of [kids TV show] Going Live and Willy Wonka. Weird".

Who? Singer-songwriter of the indie folk variety.

Why? Ben's Tweets are very much like his Twitter bio - 'I write songs, record them and sing them for people. I love music and Bass fishing. Most of all I love my wife Liz and my son Dorian' - honest and personable.

Tweet of the week: "I've been sick now for a few days. My voice is gnarly... I'm still doing the instore though. 3 songs only. I'll sign whatever u want."

Who? 80s obsessed beat-maker from Scotland.

Why? Anyone who receives a Tweet from Alan McGee saying: "your twitter chat is second to none" is good enough for us. Here you'll find amusing tales of life on the road and, er… food.

Tweet of the week: "Grandaddy A.M 180 what a tune. I miss Grandaddy. I asked Jason Lyttle to sing on I'm Not Alone and he told me no thanks, worth a shot eh".

Who? So cool and 'now' it hurts electro-bothering pinup.

Why? Little Boots mastered Yamaha's Tenori-on while she was still in her mother's womb, so micro-blogging-ability is probably ingrained in her DNA. Tweets mostly involve partying, DJing and hangover-ing.

Tweet of the week: "Made it through DJ set. Was a right banger... Hot Chip switch LA remix... built in crowd noises... never fails".

Why? As well as keeping up to date with John Mayer's will they/won't they masquerade with Jennifer Aniston, the guitarist is one of the more humorous of the Tweeting A-list.

Tweet of the week: "Heard the new U2 today. Not sure what to think about it. I'll have to wait for the public opinion so I can think the opposite of it".

Why? Ms Heap also partakes in a regular video blog via YouTube and seems to spend an awful lot of time apologising for the lateness of her untitled third album. Regardless, her Tweets are regular, informative and, er… entertaining.

Tweet of the week: "Publisher's just left very excited indeed! Yay! x Right... back to [new song] Not Now But Soon. Was missing an old plug-in. Got it now."

Why? Trent's a musical trailblazer and is no stranger to the possibilities of online promotion and communication (yes, Grammy-bashing is included). So, being an early Twitter adopter - and a bloody good one at that - was inevitable.

Tweet of the week: "I have no idea what just happened onstage. I'm going through something".

Nick Cave
There's a very good chance that this isn't actually Nick Cave (it says 'Fake Nick Cave' in the bio section) but props to the faker for his/her determination.

Notorious BIG
There are actually 4726 people following someone who goes under the guise of Notorious BIG. We'll assume that they know he's dead, and merely enjoy imagining stuff like this is real: "Ate too much damn food at lunch. Feelin mad bloated".

Gerard Way (My Chemical Romance)
No action for 29 days but plenty before. Hmmm. Perhaps MCR are a bit busy?

Rivers Cuomo (Weezer)
Weezer's mainman started off strong but with no updates since 25 November it's getting a bit boring. One to watch.

Alan McGee
Not exactly a musician, but deserves a mention for shooting his mouth off. A lot.

If you think we've missed any hidden Tweeting gems, let us know in the comments below. If they make music and they're on Twitter, we want to know...