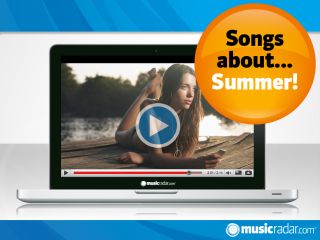 Just like the moon, the sun has been an endless hotspot of songwriter inspiration.

But with it currently pelting down with rain outside MusicRadar Towers, we need some sunny songs to help change the weather.

Check this diverse bunch. Just like the weather, they're of varying degrees of hotness.

Piece of cake. Learn it and please your friends.

Queens Of The Stone Age - Feel Good Hit Of The Summer

With a lyric sheet that more closely resembles a shopping list for a Fear And Loathing In Las Vegas-style drug binge, Queens' hymn to excess is still one of the sleaziest rackets we've ever jumped around to.This performance from Australia's Big Day Out in 2003 is killer.

The Lovin' Spoonful - Summer In The City

Classic summer song? Of course. But what's fascinating is how John Sebastian looked like John Lennon circa early '68 in 1966!

BANG! Katrina And The Waves' Walking On Sunshine. Included here for no other reason than to have an excuse to watch this scene from High Fidelity again. And it's about sunshine.

The Divine Comedy - The Pop Singer's Fear Of The Pollen Count

The Divine Comedy are often one of the most twee bands on the planet. They might be that again here, too. But kudos to Neil Hannon for this song title alone.

The sadly-missed Beta Band seen here on their 2004 farewell tour performing the amazing opener from their 1997 Champion Versions EP. An anthem for soggy Brits lamenting yet another summer spent splashing through dirty puddles.

Paul Weller's not playing the gruff modfather in this 'fruity' man-friend video from 1983, no sir. Question: what the HELL was he thinking?!

The dude's called Warren Hicks. That's all we know. We dig him.

A typically joyous pop moment from The 'Grass, here we see them performing the song at an atypically sun-drenched Glastonbury in 2004.

Coldplay's Chris Martin once said that he's never written a song as good as Hot in Herre - and he could be right. This sweaty classic may have Nelly's name on it, but it's The Neptunes' superb writing and production that makes it.

Don Henley - The Boys Of Summer

Henley's ode to lost youth has triggered more man tears than most of us would care to admit. It instantly transports you to a deserted, baking hot freeway - even when you're snarled up on a rainy British motorway.

Sly Stone's Hot Fun In The Summertime… on classical guitar?

Here's something you don't see every day. Not so much 'Weather Report' as it is the late, great Jaco Pastorius channeling Hendrix. Prepare to be knocked out cold.

It's a song about catching the sun. A sweltering task which Doves evidently plan to carry out wearing large coats and scarves. Fast-forward nine years: backstage with Jez Williams on the Kingdom Of Rust tour and you'll see nothing's changed.

"If I smoked weed, I'd smoke it to this song," runs one comment about the original. True. Here's DJ Spinna re-mixing the Kool And The Gang classic.