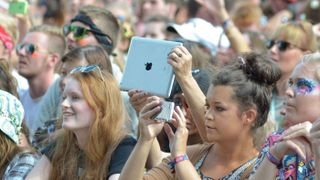 As an experienced music journalist, this writer has attended over five live shows and, during this time on the frontline of the rock music coalface, has compiled an extensive list of over-zealous, predominantly jealousy-based, grievances about the live environment.

From the tech-endowed, to tutters and 'This is my song' people, here's our list of ire-inducing live annoyances...

It's hard to think of a gig scenario that isn't made worse by viewing it through the screen of the half-cut punter two rows in front of you. Three pieces of salient advice for those of you considering capturing the moment:

If you don't get out much, there is no doubt a certain comfort in essentially bringing your TV with you to a gig. If the band are crap, you can always fire up Netflix and get back to watching The Crown.

Sadly, as any touring act will tell you, venues' wi-fi sluggishness is rivalled only by rural areas of the outer Hebrides, so George VI's stutter will likely seem worse than ever.

As with any valuable, we'd recommend leaving your tablet at home and under no circumstances removing it from your bag to take a washed-out picture of a spotlight in full beam.

Those people huddled at the back, not watching the band and talking through every song are the ones that didn't pay for their tickets. They know each other from 'the industry'.

This means that they have jobs that don't pay them any money, but offer lots of perks, such as standing the back of gigs, not watching the bands and talking through every song. They might also have access to the VIP area, which is where the support bands' parents hang-out and dreams go to die.

If they don't fall into the categories mentioned above, you might be encountering an undercover city worker. They are here to pacify their blackened and compromised souls, but also need to get those Q3-16 figures to Dave in QC ASAP.

In this situation, it's important for their process that you ensure they buy you enough drinks to redress the damage of the financial crisis.

Let us be clear: tall people are welcome at gigs. However, they should not be allowed near the front of the crowd, even if they are blood relatives of the band and very nice.

An audience should ideally be arranged in height order, descending from back to front, regardless of the size of their friends, +1s and accompanying dependents.

All music should be halted while the crowd is shuffled appropriately and held stationary throughout the show. Drinks and cups of urine will have to be ferried along a silent human chain, from front to back - like they are on British public transport.

At some point between rock's emancipation of the human mind and body from the shackles of establishment drudgery and Bob Dylan winning a Nobel prize, it became important and necessary to create the optimum live environment by tutting at fellow audience members.

Normally practiced, without irony, by Saxondale-esque punters, who otherwise spend their time reminiscing about the activities of ageing rock icons that should fall under the remit of Operation Yewtree.

This character can be found in the crowd for bands that have had a substantial advertising sync hit. 'This is my song!' guys (and they're almost always guys) discovered the band you're watching and have single-handedly guided them to success by adding them to their Mad Tuneage Spotify playlist, attending one previous show and dropping them a Facebook DM.

They will then stand three rows from the back and repeatedly tell their patiently indulgent, patently-not-arsed friends all of this, throughout a set of album numbers they don't recognise. Finally, their moment will come. At this point, 'This is my song!' guys will rapturously crow their catchphrase and forge a path to the front, arriving precisely in time for the closing chord of said hit.

Did you know that if you stand at the front of a show and someone spills beer on you, steps on your foot, or moves around in the manner of a liberal, effeminate person and you find this disagreeable, maths has proven this is approximately 168% your own fault?

Similarly, if the room was empty when you arrived and you are now surrounded by 300 sweaty teenagers, this is the one occasion where shotgun rules will not govern their decision-making and you may be forced to concede ground.

The front is not the place for getting annoyed at your fellow gig attendees. That place is at the back of the crowd, next to this writer, who can be found half-asleep against a pillar.

Hats... as worn by people who have recently bought a hat. © Richard Isaac/REX/Shutterstock

Peaked/rimmed hats are right out. Beanies are borderline, but still prove ultimately distracting as you are forced to question whether the wearer is exceptionally warm or cold.

From a distance, there is something enthralling about watching a £5.50 pint sail through the air in a graceful arc, as if issued from an Agincourt bowman. However, due to current venue prices, only the aforementioned financial services employees and those still living with their parents can afford this display of opulence.

Given that deploying this perennial favourite now marks you out as falling into either of those demographics, we'd suggest you either avoid it completely, or support the green movement by repurposing your used plastic glasses as bio-waste distribution vessels.

These people are not hard to spot. They're the ones guffawing over recounted Red Dwarf scenes while the frontman is quietly explaining the poignancy of a number inspired by his wife's battle with a long-term illness.

If this sounds like it might be you, other signifiers are a pin-drop quiet room and a thousand eyes starring daggers at you and mentally composing passive-aggressive listicles.

The exception to this rule is a Dropkick Murphys show, which is specifically engineered to be viewed at a 70 degree angle, while being repeatedly punched in the face.

These immovable concrete and steel bastards are like tall people, but less self-conscious and more important for structural integrity.

Go to a gig at a venue with lots of columns and you are essentially playing Russian roulette, except the stakes are ultimately much lower and you can just move if it begins to bother you.

Yes, rock is theatre, but it's also over-priced, over-precious and full of hammy, pointless traditions. The encore is one of them.

In an age where live music curfews are enforced to the point that someone will happily pull the plug on respected rock pensioners Springsteen and McCartney, encores are spectacularly stupid.

They say 'always leave them wanting more'. If half your audience is now sat on a train munching a Whopper and the other half is scouting the floor looking for discarded fivers, assume you have missed your window.

The 10 worst things about being a guitarist