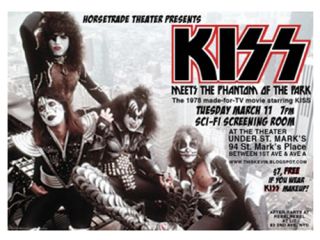 Lots of people can make bad movies, but the truth is, that's never the plan. Most people set out to make great movies.

Invariably, they fail, and when it comes to making rock movies, that failure often takes on gargantuan proportions.

But the pantheon of awful, crappy and just plain stupid rock movies are a strange lot. Some - or most - of them are so absurd that they transcend their wretchedness and become watchable... and actually capable of putting a smile on your face!

What follows is MusicRadar's list of 12 awful rock movies you must see.

Are these great films? No - not by a long shot. But if you see them, you might be surprised at how something so bad can make you feel so good.

Why it blows: Because it has nothing to do with the life of the Hungarian composer Franz Liszt, allegedly portrayed here by The Who's Roger Daltrey. Nor does it have anything to do with reality. Director Ken Russell presents fellow composer Richard Wagner as Listzt's bitter rival (in truth, the two musicians were friends), so consumed by jealousy that he unleashes a cryogenic monster (played by a well-cast Rick Wakeman) along with a bunch of machine-gun toting Nazis. Nutty stuff.

Next: The Bee Gees and Peter Frampton butcher The Beatles

Why it blows: How one of the greatest - if not THE greatest - albums of all time wound up as this pointless debacle can hardly be imagined on a human scale. In this movie, Billy Sheers (Peter Frampton, displaying the acting skills of a cigar store Indian) and the Lonely Hearts Club Band (The Bee Gees) are dispatched to spread joy across a war-torn Europe during World War II. And that's just half of it!

Why you must see it: To experience the unique feeling of your eyes popping out of your head. There's characters named Strawberry Fields, Mr Mustard, Mr Kite and of course Lucy and her backing group, The Diamonds. This is one of those 'gadzookies!' flicks where you can't believe you're witnessing something so totally literal and lame-brained. It's like watching an 8th grader interpret his favorite album for a school video project - except, in this case, you know that millions have been spent.

Next page: KISS bite the big one

Why it blows: Because it's a made-for television film that really looks like a made-for-television film. The members of KISS play - OK, brace yourselves - KISS, who are about to give a big concert at an amusement park. Anthony Zerbe portrays a crazed inventor who gets fired from the park and wants to stop the band from playing - thus, setting the stage for a battle between KISS, Zerbe and a group of KISS clones the nutty professor invents. Sound cheesy? Oh yeah, it is!

Why you must see it: The special effects spew chunks so large that you'll be ducking them - and laughing your ass off. And when the KISS clones perform in concert, you'll swear they're better than than the real thing.The fans in the movie rebel against fake KISS. You, on the other hand, might cheer them on.

Next page: Marky Mark shows why he's no Rock Star

9. Wahlberg needs an entourage in this mess

Why it blows: Dirk Diggler pops no wood in this rampant cliche-a-thon. Here, Mark Wahlberg plays Chris, a cover band singer who gets his shot at the big time when his hair metal heroes, Steel Dragon, pick him to front their group after they experience 'creative differences' with their original goofball frontman. The film's main problem is that it doesn't know what it wants to be, straight drama or parody, so the sound and fury ultimately signifiy nothing.

Why you must see it: For the cliches: the big hair, the spandex, the cucumber-stuffed pants , the grade-C groupies - they become almost charming. Watching this movie is like thumbing through pages of a yearbook and going, "My God, did we look like idiots, or what?" Flat-out best scene is where Chris goes up against the singer (played by Stephen Jenkins from Third Eye Blind) of a rival Steel Dragon cover band for all-out 'who-can-suck-most?' supremecy.

8. Time was on their side

Why it blows: Gimme Shelter, the Stones' 1970 documentary (directed by the Maysles Brothers) caught the band with all their raw, pirate-like sensuality intact. It also captured an out-of-control crowd at the Altamont Speedway in California, where one of the Hell's Angels stabbed a man to death. In short, brutal, scary stuff. This film, on the other hand, portrays the Stones as a slick business operation, doling out hits for audiences that don't do much of anything.

Why you must see it: For the sheer absurdity of director Hal Ashby's attempts to interpret some of the songs by inserting newsreel footage of burning monks, famine victims and other such atrocities. It's like an exercise you'd be given in first-year film school entitled 'How Not To Make A Concert Film' - so, in a sense, you can consider it educational.

Next page: The teen heartthrob that wasn't

Why it blows: This made-for-TV flick was designed to make Rex Smith the Next Big Thing a la Shaun Cassidy or Andy Gibb (both of whom were big for a year around this time). So there's lots of scenes of Smith in painted-on pants performing lame rock songs (and some limburger ballads) with his really bitchin' group The Skye Band. They even do their thing in a parking lot outside a department store - that's how happening they are.

Why you must see it: Because when it isn't trying to show how, like, really bitchin' Rex Smith is, it somehow manages to be a corny-but-that's-OK tale of first love. In this case, it involves Denise Miller, who falls for Smith, her guitar teacher. Trouble is, she's 13 but tries to act all 16 on him, and he's 18 or something...you can tell where this is going. Still, it works. Just turn down the sound when there's music.

Next page: A bore is starred

6. The mirror has two faces...both of them bad

Why it blows: Woof! Trainwrecks of this magnitude happen so rarely - oh, wait, Kris Kristofferson was in Heaven's Gate too...never mind. For some reason, Barbra Streisand wanted to get all rock on us, so she enlisted her then-hairdresser boyfriend to produce this bloated rock 'n' roll remake of an actual classic, and then she tried to convince us that introspective singer-songwriter Kris Kristofferson would be believable as a Mick Jagger-type rock star strung out on booze and drugs. Funny thing is, Kristofferson was a total alkie at the time, and you still don't buy him in the role. Oh, and the songs are total stinkbombs.

Why you must see it: Because there's a perverse pleasure to watching trainwrecks. And this one's a 30-car pileup.

5. We couldn't get Springsteen, so we got Meat Loaf's guy instead

Why it blows: Top movie exec: "Hey, I dig that Springstreet guy. Call him up, get him to write some tunes and we'll put 'em in a movie." Assistant movie exec: "Can't get Springsteen, but we can get Meat Loaf's guy. Jim somebody - much cheaper." Top movie exec: "I love it. Let's do lunch!"

Why you must see it: Not all movies have to make sense to be enjoyed. Here we have people driving around in 1950 Studebackers, yet the soundtrack brims with overblown '80s rock (courtesy of Jim Steinman). And the whole film takes place at night, so if you're in the mood for a little nap...Oh, but there's Diane Lane back in the day, and she's singing about what it's like to be young...and free! Actually, there's one really terrific song, I Can Dream About You - you'll know it because it's the one Jim Steinman didn't write.

4. Can we send this back to the future?

Why it blows: Remember the scene in Back To The Future where Michael J Fox plays guitar with a 1950's high school band? Unbeknownst to them, he's from the future, so when he decides to liven things by going mental, kicking amps, jumping around like Townshend, then doing Eddie Van Halen hammer-ons, it's utterly hilarious. Unfortunately, he does none of that here.

Why you must see it: Because when Light Of Day isn't trying to be a blue-collar rock film that 'gets it right,' i.e., being in a band is hard, you don't get paid at gigs, rock ain't glamorous, it's a moderately affecting portrait of a family trying to get through life in a gritty Cleveland suburb. Joan Jett plays Fox's sister/bandmate, and in her acting scenes, she isn't half-bad. It's written and directed by Paul Schrader (he penned Taxi Driver and Raging Bull), who knows all about fighting and crazy people. He just doesn't know shit about rock.

Next page: When a classic isn't

Why it blows: Upon its release, this rock 'lifestyle' picture struck a nerve with young audiences desperate to 'tune in and drop out' - you know, to 'find themselves.' Taking LSD and hitting the open road apparently seemed like a good idea. Unfortunately, director Dennis Hopper must have been doing too much of the former when making this film, for it features impossibly long stretches where ABSOLUTELY NOTHING HAPPENS. (Question: did they pass out the dope during screenings? Just askin'.)

Why you must see it: Because when Jack Nicholson appears on the screen, which isn't often enough, it as if he's been beamed in from another movie - a good one. Jack plays a hard-drinking ACLU lawyer who hooks up with Hopper and Peter Fonda, and the sheer dynamic power of his acting burns a hole in the screen. He's that great - the only reason to see this tired old relic.

Next page: The Jonas Brothers teach you to rock (not really)

Why it blows: When I think rock, I think Disney. Here we have the biggest 'tween' sensations in the world today, The Jonas Brothers, showing kids how to become rock stars, which means going to some imaginary camp in the woods, where Joe, Nick and Kevin put your through your rock paces. Puh-lease!

Why you must see it: Maybe you're the father of a seven-year-old and she wants to watch it for the 50th time with you. Or maybe you have a sister who you've been mean to - enduring this flick with her would be a nice gesture. But perhaps the best reason is to take in co-star Demi Lovato, a cute girl with an ear-to-ear smile frozen on her face. How does she do it? Why is so happy? What is she thinking about? Unicorns? Closets full of shoes? It must be great to be her.

Why it blows: A 'tripped-out' movie designed to blow your mind that will have you cringing at scenes of Tina Turner (the Acid Queen) chewing scenery and Ann-Margret (who actualy got an Oscar nod here) rolling around in champagne, chocolate and baked beans. As a literal translation of Pete Townshend's wondrous 'rock opera,' Tommy - The Movie fails miserably, namely because the newly recorded versions of the songs pale in comparison to the originals. And as for Jack Nicholson attempting to sing...well, didn't we mention what a great actor he is?

Why you must see it: Because when you think about it, where else can you see Ann-Margret roll around in champagne, chocolate and baked beans?