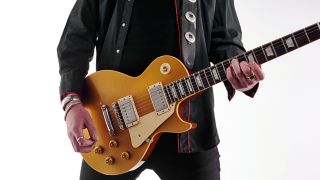 Following yesterday's news of an Epiphone guitar giveaway, Gibson Gives has partnered with two other companies to offer three months of free premium membership to a groundbreaking guitar learning platform.

Alongside Sweetwater.com and Amped Guitar Learning it is giving new users three months of free Premium Access Membership to Amped's iOS app that uses a system of Audio Augmented Reality.

“In these unprecedented and uncertain times, we all could use a little inspiration for each other and for ourselves," says Gibson CEO James 'JC' Curleigh. “With Gibson Gives, Sweetwater and Amped, we are literally providing that inspiration and opportunity for anyone who loves music and has always wanted to learn to play guitar.”

Amped Guitar Learning was developed by guitar teachers allows users to learn guitar in a very distinct way for an app. It offers real-time feedback with amped animations and videos to teach players techniques and guide them in their development.

It doesn't require a guitar cable or amp. Listening through your iOS devices' mic, the app converts your guitar sound into a tone you can hear through your headphones.

Players are able to learn songs from artists including the Beatles and Eric Clapton and different skill levels and genres are catered for.

“For us, this is like one giant love letter to anyone wanting to learn and we're proud to team up with Gibson and Sweetwater to help people learn guitar,” says Amped Guitar CEO Daniel Katzenellenbogen.

“Amped Guitar allows anyone to pick up a guitar and get an energized experience in their first lesson. We teach beginners without making them feel like beginners, which is a very powerful thing.”

Download the Amped Guitar app from the iOS store now