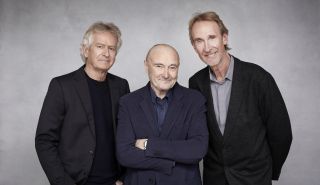 Genesis are back to turn it on again; the lineup of guitarist Mike Rutherford, keyboardist Tony Banks and vocalist Phil Collins will tour the UK this year.

The Last Domino? Tour 2020 is the first live run for the trio since 2007's Turn It On Again: The Tour. Collins won't be on the drum kit this time though due to the physical ssues he's been open about for the last few years following a spine injury; his son Nic Collins will take his place behind the kit, and the bands long time guitar and bass player Daryl Stuermer will join them.

Phil Collins and Tony Banks spoke to Prog magazine about the comeback: “There were more reasons to do it than not to do it," said Collins. "If we had to do it the way we used to tour, I don't think I'd be doing it. But nowadays it can be done differently, and I've been doing that for the last couple of years."

Adds Banks: “After Phil finished his own tour, everybody thought, ‘We could talk about it and see whether it’s a good idea.’

“Once we decided it was a possibility, we wanted to see how it would work out when we played together. So we spent a couple of weeks in January in New York seeing how it sounded. People asked, ‘Why are you here?’ We just said, ‘Oh, for a wedding.’”

Banks also added  that having Phil's son Nic on drums is a key element:

“Nic is a great drummer, but he is capable of sounding like early Phil. For Mike and I, that was always quite exciting. It means you can play some of the songs that you haven't played with Phil as the drummer for a long time.

But what about fans pining for the long-desired early Genesis reunion with vocalist Peter Gabriel and guitarist Steve Hackett?

“To get everyone on board would be quite difficult,” Banks says.

UPDATE!
The originally announced dates are already sold out, but Genesis have added the below, new UK outings.