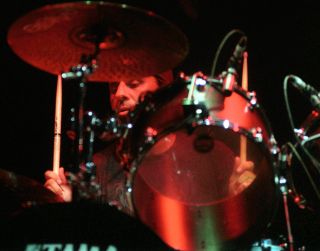 The former Slayer had been all set for a show with his new troupe at London's Garage on 7 August.

But, the show has now be cancelled due to unforeseen circumstances. It is hoped that the band will head to the UK at the earliest available opportunity.

Discussing the band, Lombardo recently said: "When people hear about my involvement in Philm, they automatically assume that it will compare to Slayer's sound. They couldn't be more different. I have scaled down my drum set to a four-piece, reminiscent of the drummers from the late '60s that influenced me.

"Each song is unique in itself, I like to refer to it as 'rhythmic emotion." It's almost like taking all the heavy songs of the '60s and bringing that era to a modern plateau, then blending them with the modern trance and psychedelic sounds of today."

Lombardo was ousted from thrash pioneers Slayer earlier this year, ultimately being replaced by Paul Bostaph.