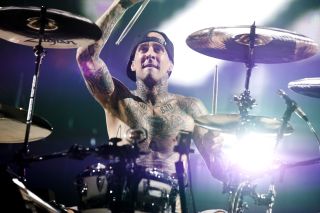 Barker had been hoping to overcome his fear of flying to join the band for the nine-date jaunt, but he has admitted in a Facebook statement that he has been unsuccessful.

Speaking of the 2008 plane crash in which he suffered near fatal injuries, Barker said: "I still haven't gotten over the horrific events that took place the last time I flew when my plane crashed and four people were killed, two being my best friends.

"I gave the band my blessing to take another drummer if they still wanted to do the tour without me. I hope to come to Australia again some day perhaps by ship if need be. Unfortunately, there wasn't a boat that worked with the schedule this time around. Once again I'm sorry to all the fans."

Bad Religion drummer Brooks Wackerman will fill in for Barker for the tour.