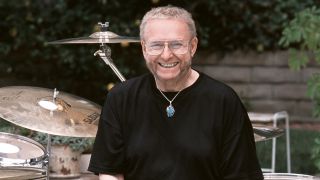 SINGING OUT OF YOUR BUTT

The BC2 bass drum monitoring system has been one of the drum world's major success stories of the last couple of years with drummers all over the globe feeling the bass through their backside thanks to the technology. One such drummer is Tesseract's Jay Postones, although when we saw the prog metal master recently he had a warning for us. "We were playing a festival recently and everything was rushed," he explained. "Somehow they accidentally connected my BC2 up to our signer's (Ashe O'Hara) mic, so I had his vocals coming through the BC2 for the whole gig! It didn't help that during the first song I shouted, 'I've got Ashe coming out of my arse!' It was the first thing I could think of to say!"

What's better than a cat drumming? Nothing. Nothing at all.

FOR THOSE ABOUT TO COCK UP, WE SALUTE YOU

The next time you mess up on stage or in rehearsals, break a skin or lose a stick halfway through a song, you might give this kid's approach a try.

Tom Grosset has done a nifty cover of Hans Zimmer's drumtastic Man Of Steel soundtrack, and even taken the time to mimic the movie trailer. Super.