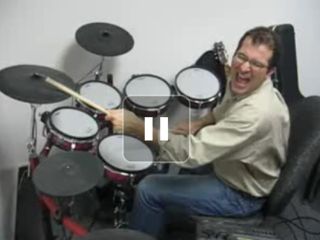 Pud rocks at the office!

Exactly one year ago, MusicRadar reported on one of the funniest, most inventive videos we've seen on YouTube. Called Death Metal Office Drumming, the clip was an immediate hit.

Problem is, you can't see it anymore - at least not on YouTube.The video has been pulled by the record label that controls the original sound recording of Infecting The Crypts by the band Suffocation.

Anyone who's seen the conservatively attired office man 'Pud' (real name Philip Kaplan) wail away with unbridled enthusiasm (and stunning technique!) to the snarling deathcore cut can attest to its high standard of comedic value.

And one would think it's a brilliant platform form to expose millions of viewers to a band like Suffocation. Apparently, the record label believes otherwise.

"I'm proud of the video," Pud writes on his blog. "And I've heard that the band likes it too. I think it's in the label's best interest to keep this video online. If they hired someone to make a music video for this song, it probably wouldn't have received so many views."

You can still see the clip, though

For the time being, it's embedded on Pud's webpage, and he even offers a few other website choices where the video is still available.

Thanks for the laughs, Pud. You rock!