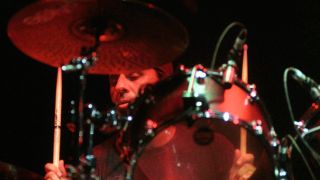 Dave Lombardo is officially out of Slayer, with Paul Bostaph again stepping into his shoes.

Bostaph returns to the band after an 11-year absence, after originally joining in 1996.

Lombardo has been out of the picture since voicing concerns over the band's financial strategy earlier this year.

Jon Dette (who himself replaced Bostaph back in 1996) had been filling in for the band on tour.

A statement from Slayer reads: "Tom Araya and Kerry King are very pleased to announce that Paul Bostaph has rejoined the band on a full-time basis. He will be behind the drumkit beginning June 4 when Slayer kicks off the first leg of its 2013 international tour in Poland."

The move comes less than a month after the death of Slayer guitarist Jeff Hanneman.

Frontman Tom Araya added: "We're still pretty numb from the loss of Jeff, but we don't want to disappoint our European and South American fans. We need to begin moving forward - having Paul back makes that a whole lot easier."