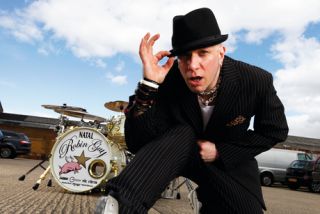 In the latest issue of Rhythm, madcap drummer Robin Guy lifts the lid on his crazy career and confirms why he's one of the great upcoming heroes of British drumming.

During the interview Robin gave us a tour of his awesome Natal/Sabian set-up, including some of his own designs and innovations. Check out the full video below.

Robin is due to embark on a Natal UK clinic tour next week where you can see Robin, and his kit, in action. It kicks off at Nevada Music in Portsmouth on 16 July. He will then head to Croydon's Rockbottom the following day, before shows at Drum Stop in Sheffield (18) and Manchester Drum Centre (20).

On what you can expect from the dates, Robin told us: "With my clinics, I believe in giving everybody something useful and practical they can take home with them and actually use - be it handy hints and tips, or groovy drum licks."

Robin added that during the clinics he will tackle topics as diverse as bagging session work and thinking outside of the box with your set-up to how to survive playing 55 shows in 60 days. As to what kind of beats he'll be blasting out on his two Natal kits, Robin said: "I'll be playing everything from funky hip-hop, ragga and drum'n'bass, balls-out metal and blistering hardcore, country and acoustic folk to dirty rock'n'roll and the cheesiest of pop! There's something in my clinics for everyone, no matter what age or level you are, or if you're into jazz or death metal, there's even something for mums, dads and guitarists and some amazing drummy prizes will be given away too."

For more details take a look at www.nataldrums.com.