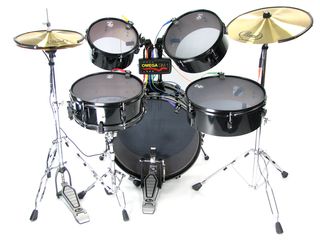 The biggest gaming peripheral ever?

PRESS RELEASE: Omega Music Technology has brought real drums and cymbals to the popular Rock Band and Guitar Hero music games with the release of the GM-1 System.

"I just wasn't satisfied with the plastic drums on the market," said Tom Baker, president, Omega Music Technology. "After the stunning success of the Omega Pedal, I saw that I was not the only one who demanded realism in a rhythm game. Creating the GM-1 System was the next logical step."

The GM-1 System installs on most standard drum sets, or can be bought with a genuine Pearl drum set with an attractive package discount. Individual sensors detect each drum hit with speed and accuracy.

"We knew that noise level, keeping family and neighbours happy, is a big problem for drum sets. So we made the GM-1 System able to work with mesh head technology, giving full realism while allowing whisper-quiet playing." said Mr. Baker. The drum set includes real drum heads to let players graduate to playing songs without the video game.

Another first for the industry is the functioning hi-hat. "The hi-hat is the most used instrument in rock songs. Having a functional, real hi-hat makes for amazing gameplay experience in Rock Band.

This realism pays off. "We brought accomplished drummers in who are not video game players, and set them down in front of the set. They picked a song they knew, and were able to immediately play through the song, using all the technique they learned playing gigs." Mr. Baker also states that this is the perfect system to learn how to play drums. "The process is very organic. You learn real technique, and before long you start playing songs even without the game."