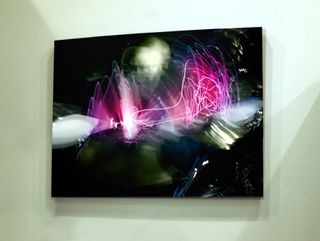 Bill Ward today jumps back into the spotlight with the launch of his latest venture - his fine art debut.

Ward, best known, of course, for his pioneering work behind the kit with Black Sabbath, has joined up with Scene Four to create the Absence of Corners art collection. You can see one example above, head here for the full set.

Of course, Bill has been in the headlines over the last year for his continuing absence from Black Sabbath's latest reunion, and when we spoke to the drum legend he admitted that this art project had come at the perfect time.

"It was very worthwhile for me because I haven't been doing that well emotionally," Bill told Rhythm. "I've had a bit of a rough year so it was quite therapeutic."

Discussing the process of putting together the collection, he added: "I was contacted by Scene Four. They gave me some details and it sounded interesting. I initially thought I'd show up with my drums and they'd take some pictures and that would be it.

"I showed up and it turned out to be something far more technical than that and far more work than I thought it would be, in terms of my involvement. It wasn't just me playing drums, there was coming up with titles, looking through the pictures and working with them. I had sticks of different colours and it was all shot in the dark."

Bill revealed that it quickly became more than just a few snaps in the dark.

"It became more than just, 'Oh look what we've been able to do,' I started to realise the way that the art was showing itself. It 's almost as if it was showing my emotions. All of the titles have a consistent theme, it's about loss and grief, I guess it's quite morbid in a way, but it's a healthy morbid, it's a healthy expression. I'm just telling the truth.

"I'm definitely attached to it, I kind of let my draws hang down! Whoever will see this, it's almost like me sharing my insides with them, it's a really strong connection. It's been very therapeutic, it turned out to be quite healing. It has helped me a lot. I've been writing music as well and doing other things, but this is has been part of me standing up and saying, 'Ok, what's the next thing I need to do for myself.'"

He also told us that he is still working on new music, with a pair of projects on the go.

"I've got my own projects that I've been working on. It is slow going on. I finance these projects myself and it is slow coming because I actually don't have a lot of money. So, every month I manage to get maybe $2,000 or $3,000 for production.

"But, what I've done, I really like. There is an album in the works, it's the same album I've been working on for a long time. It's not Beyond Aston, it's another one called Accountable Beasts. Beyond Aston, I hope, will come out by next year, I know everybody has been really patient. I do have some coming out."