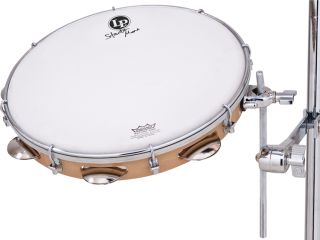 NAMM 2011 PRESS RELEASE: LP drumset artist Stanton Moore's playing style is an eclectic gumbo of New Orleans funk, Afro-Brazilian rhythms and some down-home American rock 'n' roll. And his selection of gear matches his ethnic diversity, including the long-time use of a Brazilian-style pandeiro mounted on his drumkit. Now Stanton has collaborated with LP's designers to create the Rio Stanton Moore Pandeiro.

At 12" in diameter, the Stanton Moore Pandeiro is perfectly sized for convenient placement around a drumkit. It fits comfortably into a snare stand, or it can be "flown" off of any cymbal or drum stand using the included shell mount that will fit onto a standard 3/8" rod. The high-density hardwood shell is strong enough to withstand the impact torque created when the drum is played this way.

The pandeiro is fitted with seven sets of jingles and eight tuning rods to help it create a characteristic Brazilian sound. A Remo Emperor head adds depth to the drum's sound while providing durability for drumstick playing. The drum comes supplied with a convenient carry bag.

The LP Rio Stanton Moore Pandeiro is as distinctive and original as the drummer it's named after. Check one out, and get groovin'.