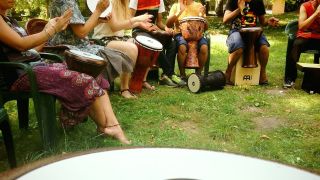 Meinl has announced a huge charitable donation from its 2015 festival proceeds.

Money to the tune of 20,000 euros raised from the 2015 Meinl Drum Festival and voluntary contributions will be split between two organisations.

Percussion instruments worth 10,000 Euros will be donated to the Danilo Perez Foundation in Panama. This organisation recruits children and young people at social risk with a talent for music who can't afford a musical education and offers them a free scholarship to promote and develop their musical talents.

The other 10,000 euros of percussion instruments will be donated to the Károly Istvàn Orphanage near Budapest in Hungary, where music therapy plays a big role in their educational program, including working with physically and mentally handicapped children.

Meinl's festival coordinator Norbert Saemann says: "Once again, thanks to everyone who attended this year's festival. Without your support this wonderful donation would have not been possible."

The company has also announced that the 2016 Meinl Festival will be held in Warsaw, Poland. For more details keep an eye on www.meinl.com.