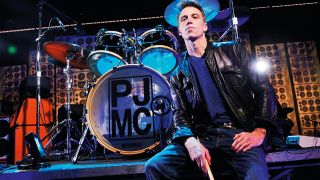 Matt Cameron's double duties with Pearl Jam and Soundgarden have finally caught up with him.

The drummer will sit out Soundgarden's 2014 touring run, as he focuses on promoting Pearl Jam's new album.

In a statement Cameron said: "I will be taking 2014 off from Soundgarden touring due to prior commitments promoting Lightning Bolt with my brothers in Pearl Jam, and the desire to have more time at home with my family.

"I am trying to balance the many twists and turns of my awesome music career. This is temporary. I am still an active member of Soundgarden."

Back in Rhythm's 2012 cover interview with Cameron, the sticksman acknowledge the problems just around the corner.

He said: "That's what I'm striving to avoid - the clash. Everyone is on the same page. The Pearl Jam management and Soundgarden management are always in contact so there haven't been any clashes. I've had to put the brakes on some touring opportunities just because I wouldn't have enough time to regroup. I have a family and I don't want to be on the road all the time. We're trying to go eight months to a year in advance just trying to make sure that nothing clashes."