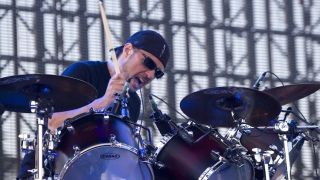 Lombardo at the kit for Slayer in 2011 (Image credit: Press Line Photos/Corbis)

Dave Lombardo has given further detail on his split from Slayer, saying that he was paid on average just $745 per show, despite the band bring in around $49,000 per night.

Lombardo said: "I just said, 'Guys, look at this. This came from your accountant.' And it showed all the money. It wasn't showing where the money was going, it was just showing 'gross,' 'expenses,' 'net.' And out of that net, I made, on tour, in 2011, 67 thousand dollars. Kerry and Tom, that was about 114 thousand dollars they made on tour. So if you did about 60 shows, divide that up between 60 shows…Anybody have a calculator? No, not 60...Let's say about 90 shows per year: 30 in the spring, 30 in the summer and 30 shows in the winter, in the fall.

"So you break that up per show…Really? It's disgusting. I'm not gonna…I bust my ass up there playing drums. I mean, I am just sweating, I'm beat. And for the guy in the Hollywood Hills, for his facials, his manicures…No, I'm not gonna play for that. No."

Lombardo was ousted from Slayer early last year, being replaced first by Jon Dette and then Paul Bostaph.