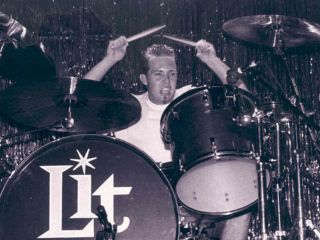 A fighter on stage and off

Sad news to report: Allen Shellenberger, 38-year-old drummer for Lit - which scored the late '90s pop-punk hits My Own Worst Enemy and Miserable - has been diagnosed with a malignant brain tumor.

In light of this, Lit have scrapped their upcoming dates with KISS and are rallying around their longtime bandmate.

"Allen's young and healthy and, if anyone has a chance to beat this, it's him," said Lit guitarist Jeremy Popoff. "As sad and scared as we all are, we're standing by him and staying positive. We're going to fight this together."

Shellenberger is being treated with radiation and chemotherapy at Cedars-Sinai Maxine Dunitz Neurosurgical Institute in Los Angeles, California. His form of brain cancer, a malignant glioma, is the exact same diagnosis Senator Ted Kennedy has just received.

Here's to a speedy recovery for both men.