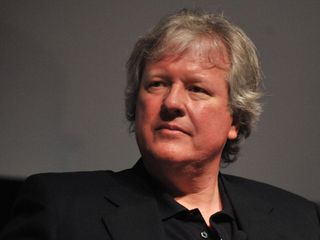 From punk to new wave to funk to reggae and African music, drummer Chris Frantz has done it all. © Dziekan/Retna Ltd./Corbis

"I never imagined that Genius Of Love would have the life it's had, but boy, it's great that it does," says Tom Tom Club's Chris Frantz of the 1981 hit that keeps going and going. "That's the song that allows Tina and I to tour the world and do what we do. That song and Wordy Rappinghood - those are what get us the gigs."

Tina, of course, being Tina Weymouth, Frantz's wife of 34 years. The married, drum-and-bass team are Rock And Roll Hall Of Famers thanks to their co-founding (along with David Byrne and Jerry Harrison) the adventurous and wildly influential Talking Heads.

Tom Tom Club started as a side project, but their first two albums hit big, and by the time Talking Heads folded, Frantz and Weymouth made it their full-time gig. Recently, the band finished a tour of Europe and the US, and have begun recording at Frantz and Weymouth's home studio in Fairfield, Connecticut.

MusicRadar sat down with Frantz recently to get the skinny on current doings. In addition, we talked about his drumming influences and how he incorporated African rhythms into the music of Talking Heads. What's more, Frantz shared his memories of the legendary CBGB back in the day, and he answered the burning question on everybody's mind: What's he really think about drum solos?

"It was fabulous. In fact, I recently did an interview with Richard Butler for this radio show I do every week on our local listener-supported station, WPKN. You can listen to it online at WPKN.org. The tour was great. It was the first major American run we'd done in some time, so we had a ball."

What's the status of the recording you're doing? You're working on songs, but not necessarily for an album. EPs, possibly?

"We're working on one now, actually. We hoped to have something available already, but because of touring we just weren't able to. We recorded some tracks last month, Tina's working on the vocals right now, and I think the tunes will be ready in the new year. We're talking five tracks or so.

"Doing an entire album is so stressful. And right now, people just want to hear a couple of songs; they're not into full albums. That's fine. We'll still give some something good."

How would you describe the new material?

"It's funky and very natural sounding. [laughs] It's not overly processed. It's got real drums. I can't think of anything on it that's sequenced. Everything is played by people. It's very lively."

You're also working on something separate from Tom Tom Club.

"Yes! Tina and I are doing something that's more electronic based. It's still gestating, but we do have some things in the can that we like. When people hear Tom Tom Club, I think they expect a certain kind of vibe, a buoyancy, something that's good to dance to. But we have things that are more on the dark side, the noir side, and that's where these ideas will go. It's going to be called Chris und Tina, German-style." [laughs]

Do you and Tina have any sort of process when it comes to writing?

"We usually start with the music first, which in our case usually means bass and drums, a good grove. Sometimes we'll have a title, but that's rare. After we have the music, then we expand. Sometimes we play everything ourselves, and other times, like in the case of the stuff we're doing now, we'll call in our guitarist, Pablo Martin, and our keyboard player, Bruce Martin, and we'll put everything into Pro Tools.

"Tina will do the vocals last. She'll listen to everything over and over again, and then she'll work on things. She's usually alone when she does that. She's able to record her vocals on her own now in our studio. I'll just pop in from time to time and say, 'Oh, that sounds great!'" [laughs]

So how does this work? With most songwriting teams, there's space involved; they lead separate lives. With you and Tina, however, you're in the same house - you're husband and wife.

"Usually, since Remain In Light, we just start recording. We don't do demos, nor do we sit and write things on a piano or a guitar or anything like that. We just record and get a drum part that we like, and then Tina will work on a bass part, and after that we'll add other things.

"We have Pro Tools, the latest version, or at least this time last year it was. We also have a 24-track machine, which is in state of disrepair - the heads are being rebuilt. We've had it since 1989. We're going to go through the laborious process of transferring all of our analog multitracks to the digital domain.

"But we do have a Studer half-inch tape machine, and anytime we finish a mix we mix it to the half-inch, so we get that warmth and compression. It always sounds better on the tape."

What are your memories of working at Compass Point?

"You know, it was really, really great. Talking Heads were the first band to ever record there. Chris Blackwell had passed on us because he was too involved with breaking Bob Marley at the time, but a few years later - realizing that we had a certain cache, especially with the New York press - he told our manager, Gary Kurfirst, that he'd give us a great deal if we recorded at Compass Point. I guess he thought we'd help bring other bands down.

"We were told there were a few 'bugs' in the studio, but nothing we noticed. It was terrific. A great facility, a terrific vibe. I don't think we had ever been to the Bahamas before. Believe me, it made a nice switch from Long Island in March! [laughs] We did More Songs About Buildings And Food there, then we returned for Remain In Light, Speaking In Tongues, and of course, we did two Tom Tom Club albums there."

Let's talk about your development as a drummer. Who were your first influences?

"The first playing experience I had was marching band in school, so I guess John Philip Sousa would be my first influence. [laughs] Then I got into all the stuff on the radio at the time, The Ventures, The Four Seasons and, of course, The Beatles. After The Beatles came out, my friends and I formed little garage bands to try to emulate The Beatles.

"Then I got into the Stones, and I loved Charlie Watts. Charlie, Ringo…and Al Jackson Jr. from Booker T. And The MGs. I love taste and simplicity. If you can lay down a cool beat and do something funky, that's good enough for me."

What was the evolution with you discovering funk?

"I got into James Brown in the seventh grade. Stevie Wonder was pretty funky then, too. And a little later on, I was really blown away by Parliament-Funkadelic."

What kinds of things were you listening to around the Remain In Light period?

"We were listening to a lot of African music, although we really got into it with Manu Dibango, King Sunny Ade and Fela. I had been into a lot of that music earlier. I was trying to adapt the playing styles of the drummers into what I did. I'm not saying I did. What I was doing wasn't authentic, nor were the Talking Heads playing authentic African music. It was more 'inspired by.'"

So everybody in the band was totally into it. At the time, the press presented this direction of the Talking Heads as being spearheaded by David Byrne and Brian Eno.

"Yeah, it's too bad it got put out there like that. No, we were all into it, very much so. The press liked to have you believe that David and Brian did everything, but it really wasn't like that. That's the way the story goes, I guess." [laughs]

What was it like working with guitarist Adrian Belew? Did you give him direction or just let him go?

"Oh, we'd just let him go. [laughs] No direction necessary. We might have said, 'OK, the guitar solo goes there,' but with Adrian, you don't tell him what to play."

As for your drums, you're a Pearl player. What do you like about them so much?

"I've been with Pearl for the past 12 years or so. They sound great. The company used to be very nice to me - I don't hear from them that much anymore. Maybe they keep more in touch with their higher profile guys. But I do love the drums a lot.

Frantz in 1980, during Talking Heads' Remain In Light period. © CORBIS

What are your thoughts on drum solos?

"I don't think about them very much. [laughs] I mean, I like Wipe Out as much as the next guy. If it's a nice, short drum solo, like on Take Five, that's cool with me. But I was never a fan of the rock drum solo, nor am I fan of the rock bass solo…or the rock guitar solo. I'm happy if everybody just plays a nice rhythm."

What are your quirks when it comes to drumming?

"I'll tell you, I have taken to wearing a batting glove on my left hand, the hand that hits the snare drum. For years and years, I would get calluses and blisters - it was really gross. So I was at a sporting goods store and I saw these leather batting gloves. I'd seen guys using them, so I said, 'Let me try 'em,' and they really work!

"My other quirk is that I don't use a ride cymbal. I think rides are mainly for jazz. I don't do the riding thing. I have some nice splashy cymbals, but no rides."

Finally, what are your memories of CBGB back in the day?

"Oh, it was incredible! And the great thing about CB's was that you had to play original material there - they never had cover bands. So it really offered new bands a chance to develop and find an audience.

"It was also a really cool place to meet other musicians and hang with them. I loved talking with Richard Lloyd and Dee Dee Ramone. Let's see…then there was Lenny Kaye, David Johansen. Oh, and Debbie Harry, of course! Just to be in the same room with her was fabulous. It was great place, almost like a clubhouse."